Well, what an action packed start to the day!

Today...up early....and then off to the nearby big swimming pool. The team are determined to try to get a bit fitter!! The aim was to do 20 lengths of the 25 metre pool each. Bert managed 4 and a half lengths plus 2 attempts to clear the pool length underwater....managed 3/4 which ain't bad for a first attempt!! Mandy, 42 lengths (swims like a barracuda); Gary half a width; Jai...tried to break Ai 's (see Face book under Ai Futaki) new record....and only failed by 99 yards...so, very close.

When she was here, Selena and husband Kevin researched and then tried out some new resturants and discovered some really good ones. After swimming, we all headed off to the nearby Wine Connection Bistro for a superb breakfast costing a whole £3!! Well Done, Selena and Kevin for discovering this gem.

And then back to the house pool for a bit of R and R. Mandy is photographed checking to see if Gary is still alive after his half width exertions. You may suggest your own caption for this photo...prizes will be awarded.

After a bit of time in the pool, Bert noticed some hefty swirls in the lagoon behind the house so our lads were soon alert and into action doing what they do best....fishing. Right now they are out there trying to catch the fish and I've just heard Bert shout out that he's 'dropped it'...so they have had the monster on...which is a start.

I ain't too sure what they think is out there but I know for sure our Thai pool cleaner is more likely to catch it with his special 'suck it in' tackle. Here he is, behind our two heroes, setting up his own special hosepipe rig which I suspect he lays out close to the quarry and then sucks in like buggery....who knows if this will work??? 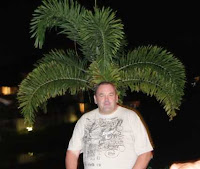 And just a quick photo from last night's 'Meet the Neighbours/Welcome to Phuket' gathering. Gary has announced that he is having nothing to do with Ladyboys this year and refuses to go to the Simon Lady Boy Cabaret show in Patong. Then, shortly after this announcement, Gary emerges from the tropical garden with a headpiece Danny La Rue would be proud of.
You just never know what that wag, Gary, will get up to next!
And now a bit of seriousness...if you have Facebook...look up Ai Futaki. Ai is a young Japanese lady who has been friends with son Tom and me for the past eight years. I first met Ai in Koh Toa when she was learning, along with Tom, to be a PADI diving instructor. They teamed up again to become Free Diving Instructors and the following year (2008), Ai supported Tom in Koh Lanta, to the south of Phuket, when he won an International Freediving event with 3 dives to 50m (yes, 50 metres...no scuba tank!) and breath holding for up to 5 mins 30 secs. Anyhow, Ai is a brilliant lady; extremely driven, highly skilled, very intelligent, fabulous underwater photographer etc etc. I really admire her. She has just entered the Guiness Book of Records (see Facebook etc for what she has achieved) and also set the new Japanese Lady's Free diving record in Mexico. Terrific. Well Done, Ai! I'm very proud of you!
Ai will be coming to stay with us in March for a short break. Quite a few of you have met her and have followed her achievements. Mandy, who is here now, has met Ai and they have been in communication via Facebook. It's really great to know such a gifted young person and I'm delighted that some of you guys staying with us have met her. (See, I CAN be serious sometimes!!)