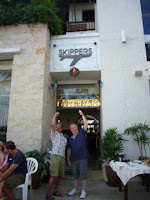 Weymouth skippers Penny and Whittall had a new restaurant in Phuket's Royal Marina named in their honour. Here the Internationally unknown skippers were ignored by the crowds as they frantically attempted to attract attention to their lack of importance and to the sign above their heads. 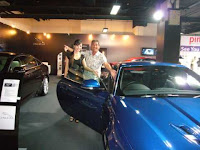 There were a few old bangers inside the exhibition. Jaguar were on display in force with this cheap looking number costing a pathetic £130k. The car, along with the Thai model, were offered as a free gift to skipper Whittall who collapsed into hysterics at the sheer cheek of the obvious backhander. 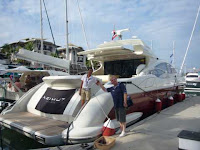 The bribery for our two Weymouth non-entities didn't stop there. Outside, skipper Penny was being bribed by a £2 million little power boat number and the offer of an instant bride....he of course refused preferring his soon to be launched new vessel, Flamer IV, in Weymouth and a night out at Dorothy's. 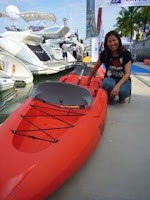 Jai was not so easily tricked. She refused all the free gifts being offered to our skippers and splashed out on a brand new craft which will be used for offshore trolling charters starting in February once the craft is fully glued together. 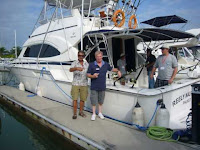 As a final effort to persuade our Weymouth chaps to splash the cash, this rather quaint Gameboat complete with crew was offered for the ridiculously low price of 40 million Baht (£820,000). It costs £2k per day to charter it but four customers can go on at once so that makes it a very reasonable £500 each for a 10 hour trip. Penny and Whittall have now realised they need to match the prices in third world countries and raise their charter prices accordingly. 10 chaps (our boats have much more deck space) at £500 each = £5,000 per day which is about the right sort of price a UK charter angler should reasonably expect to pay. Both skippers apologise for their ridiculously low rates to date. 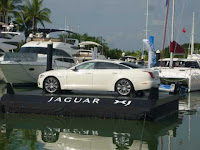 Boat owners in Phuket Marina do not expect to have to walk far to their boats. Floating patforms are moored alongside an owners pontoon mooring and their car is lowered into place. The owner steps directly onto his boat and goes to sea. Weymouth Harbour need to get a grip and adopt this method so that ageing skippers can be rewarded properly by the local Council for their lifetime of service to the Borough's tourist trade.


This Blog will continue tomorrow once the effects of continuous pleasure in the Land of Smiles have worn off in the warm light of the next Thai dawn.................
Posted by OFFSHORE REBEL THAILAND at 4:57 AM