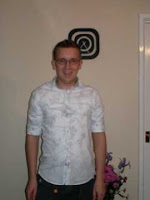 Boys will be Girls and Girls will be Boys...it's a mixed up world.

Here here is...Mr Kevin Lowe. Fresh out of UK and ready to take on the complexities of the Ladyboy Culture here in mad Patong, otherwise known as Dirty City. And, accompanying him on this tour of insanity and gender change is our favourite Sailors Return ex-Barmaid...Selena who is now the Manageress of an Upmarket resturant in Bath.

Mr and Mrs Lowe, charming examples of a well behaved British couple, were looking forward to having a whole new experience. Mr Colin Penny is of course used to people not knowing what sex they are because he is a charter skipper. 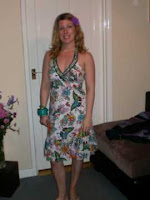 Here she is...the glamourous Mrs Lowe, alias Selena Penny......I have a feeling the Ladyboys are going to be extremely jealous of Selena's looks.......ha ha. 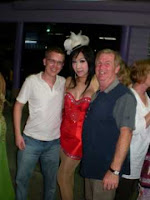 Kevin and Father-in Law Colin made friends with a charming young number who they called 'Bob'. Bob had magnificent Bobbets....earned from years of gyrating in a sensual manner down at the old Phuket Bingo Hall for the locals. 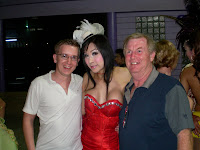 Bob became extremely attached to our two adventurers and clung to them...not wishing any other Ladyboys getting into their (deep; VERY deep) pockets. 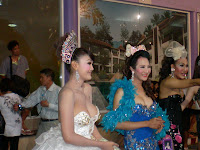 Meanwhile Selena, Teresa and Jai had dressed up in glamourous gear in the hope of raising a few Bahts before hitting the wild nightlife of Phuket.
Look good, don't they? 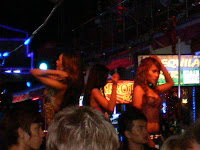 The evening started off gently enough...Colin had disappeared into this club by now.....but then it was went seriously downhill as our guests insisted on staying out until 0400...dancing and lashing each other with foam whips in the Devils' Cauldron.
That Lowe/Penny family are serious party goers...our next guests have some wild shoes to fill!!!!!