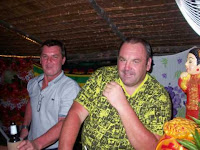 This week the local weekly newspaper, The Phuket Gazette, carries the story of a police clampdown on bars and nightclubs in the Rawai area....our favourite nightly haunt.

Apparently everywhere 'open' is supposed to shut down at 0100 whilst enclosed venues can go on until 0200.

This has come as a great shock to everyone as we are all used to the bars staying open until all the customers had left...whatever time that might be. The owner of the Sunshine Bar, a particular favourite spot, had just been released after sweating it out for a couple of days in Phuket jail along with several there other local bar owners. Not a pleasant experience but nothing seems to stop Thai people smiling...in fact the photo in the newspaper shows the Sunshine Bar owner smiling away as she was being arrested. 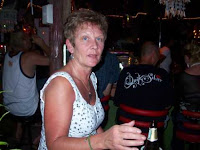 Because of these ongoing events, Simone, the boss, (quite a few of the staff in the Sunshine Bar is a Ladyboy) put Mandy on watch in case the Unformed Ones made a sneaky return. Her job was to ring the Scatter Bell if her suspicions were aroused and the staff could then hot foot it into the Sauna establishment next door leaving the clientel carrying on as normal. Hopefully, the customers would be not be arrested! 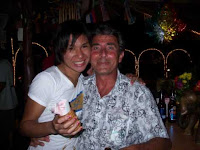 With Mandy on guard and Jai locked up back home, Whittall was able to enjoy a daliance with his favourite Ladyboy, Martine. Scrummy!! 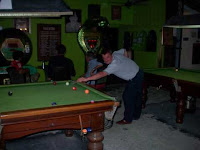 Bert refused to take part in any of this Ladyboy stuff...he's a bit of a coy chap you understand...and went off to play a game of pool totally on his own. 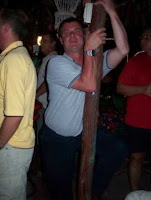 But, as the evening warmed up...even Bert got into the action and had a go at climbing the Bar Pole. Unfortunately this was the wrong one and has splinters. The metal one that everyone else was shimming up and down (before Gary bent it) was behind the bar.

The Sunshine Bar is a real fun place. It's always full with lots of different Nationalities having a good time together....it's what Phuket is all about; fun and friendship.
Posted by OFFSHORE REBEL THAILAND at 2:50 AM