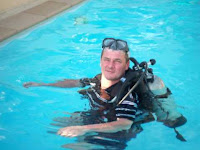 Bert's plane doesn't leave for ages but he was so worried about Gary's lack of direction that he considered a three hour period to cover the 45 minute trip to the airport to be wise.

So, depending on the success of the journey, Bert will either be in downtown Madagascar by now or sitting in the Bill Bailey Bar in Phuket airport. Gary, we estimate, will take about 5 hours to return without Bert's navigating abiities to assist him.

Anyhow, here's a couple of photo's to reflect on Bert's stay with us. Here he is in donning scuba gear for the first time. We are proud to announce that Bert managed to reach the dizzy depths of nearly 3'' (in my swimming pool) before he decided that Scuba Diving was too emotionally disturbing for him. Scuba Diving is all about control of the mind......and as many of you have now gathered, Bert's mind, such as it is, tends to be on other matters. 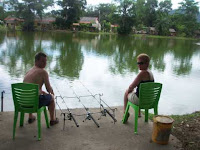 We have discovered this week that Bert is a Ladyboy Magnet. Wherever we go, they seek him out....and that's not just because he's giving them the old 'come on'. When we were fishing at the lake, Bert was so concerned about any Ladyboys scaling the surrounding fence that Mandy had to agree to stay with him at all times to act as Bodyguard. Here they are keeping a wary eye on a lurking suspect. 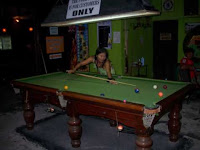 We like Guy's Bar as it is a Lady Free zone......but Ladyboys still manage to sneak in for a quick game of pool. Bert was firmly into this game until Mandy gave him the nod that his opponent's name was Cornelius and 'her' feet were a good size 11 (always a giveaway Jai assures us). Those deep manly cries when 'her' balls were sunk also gave a faint hint of something amiss. Bert left early. 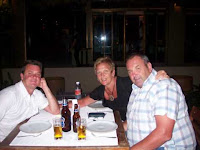 Phuket town is a rambling 'City' full of Portuguese Sino Art and Architecture. Currently there is a move towards trying to gain UN Heritage status for the town and then a major restoration programme of the magnificent buildings can be undertaken. Phuket Town is full of excellent resturants. Here we are at the Natural Resturant which is a building stuffed with character and which boasts an imaginative Thai food menu. 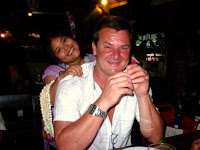 Bert, as usual, was involved in other activities whilst the rest of us enjoyed some terrific cuisine. Yes, it's a trainee Ladyboy....'she' was about 12 years old. At this point Mandy had to give Bert a bit of a stern lecture especially as the resturant staff were starting to give Bert some ominous stares. Bert said it was the best massage he'd ever had....altho' it only lasted a minute or three. And he was given a pretty rose to remember the occasion by. 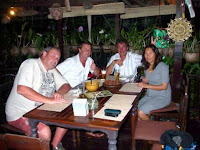 Here we are just after dinner having a nice group photo taken....but where are Bert's eyes directed??? And what is that little gesture with the thumb that he thinks is going unnoticed????
Yep; he'd spotted another one.... 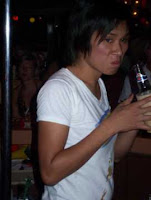 However, this Ladyboy, didn't seem too enamoured. There appears to be a certain aura of mocking distain about 'her'.
Never wanting to miss the chance of
making a few Baht for the family, 'she' called over her 'sister'. 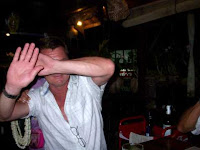 At this point even Bert went into a severe reaction!
As this is a family blog, I am not allowed to show the photo of what caused such an obvious gesture of surrender.
Bert, on our last evening meal together, finally gave up the struggle and admitted he was no match for the Ladyboys of Phuket!!
'THEY SEEK HIM HERE; THEY SEEK HIM THERE...THOSE LADY BOYS SEEK BERT EVERYWHERE...XXXX
Posted by OFFSHORE REBEL THAILAND at 8:37 PM