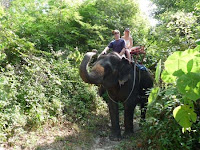 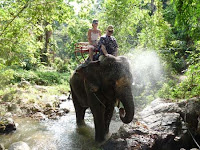 Elephants V Fish
Fiona wants all her pals back in Alderney to know that Mark isn't having it all his own way with the fishing!! Today was 'Fiona Day' so while the lads are all off fishing....Mark and Fiona took the elephant trail.
I downloaded these photo's quick as Mark and Fiona and raced off to the next part of her day....which is a Thai Culture show in nearby Phuket City....bet Mark's really enjoying that!! I reckon by now they would have settled down to a nice bit of Thai Dancing...!!!
Meanwhile I just had a phone call from one of the lads who had shot back to a nearby shop to get cold beers for the lads on the end of the latest rock mark...but...he's been delayed...tempted by a Thai massage...hmmmmmmmm
Posted by OFFSHORE REBEL THAILAND at 4:05 AM