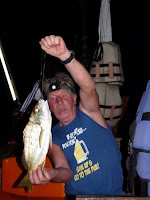 Firstly, the photographs!!!! Not my fault! I wasn't there!! Too many people wanted to go so I bravely stayed on the shore and suffered in a local taverna (ha ha) waiting for the gentleman to return.

So, photographs (or lack of) courtesy of our Alderney reporter, Mr Harding. His excuse? New camera and hadn't had time on the 12 hour flight to Thailand to read the instructions.


Now you know why faces are hidden or are taken showing an impressive face pulling routine...but we gotta show you the fish.....and only a few photo's have managed to get a fish in the frame...arrgggg!!!

Here's Mr Dave Lovelock (above)....EFSA England International, holding up a snapper taken on a Portland rig with squid bait. Good old 'Portland Rig'...caught the bulk of the fish that night and outfished the local skipper's rig!!! 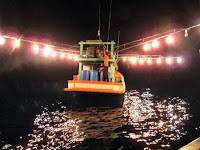 During the evening the skipper decided on a move to another mark. Unfortunately the boat didn't want t leave.....flat batteries. Baring down on our intrepid mariners was a squid boat with a massive net floating ahead of it and light ships everywhere (light 'ships' are small boats with masses of lights everywhere to bring the squid to the surface..ready for the mother ships to haul the next around the shoal). On this occasion the longtail boat the lads was on was also encircled and being dragged towards the 'mother boat'.

Thai people work very well together...they are like a great big family. Once the Captain of the squid boat realised what was happening, all the various crews sprang into action and the situation was sorted. A battery was passed over and the longtail started....such excitement at sea, eh? 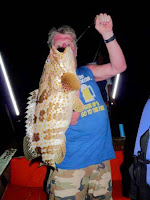 This might be Dave Lovelock again hiding behind an estuary cod...Mark had obviously told Dave to cover his face after the photo above....


These cod are wonderful eating....as discovered the next day once Jai had filleted and prepared the fish in a number of ways....grilled, baked, fried, curried, stir fried with ginger, spicy fish soup......she's a talented gal, that Jai. 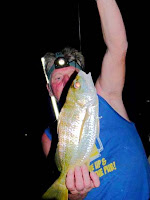 I recall years ago when I used to write the sea angling page for the Dorset Evening Echo. I tried to encourage anglers to send in their fish photo's. This was in the days of pre-digital photography. People didn't know what their photo's looked like until they were developed and the money had been paid. So, I was sent in all sorts of rubbish. As a result of our dear friend Ivan Wellington's (skipper of Weymouth based Topcat and tallest charter skipper in the Universe) efforts at photography, I decided to run a 'spot the fish' competition....yes, it was THAT hard to see the fish that was supposed to be in the photo. Thankfully Ivan has come on a bundle and is now a fine photographer...although many of us now are too frightened to take a photo for a magazine or web site as all that does is attract the wrong sort of attention from the multitude of people who want all angling banned and anyone enjoying an active outdoor life locked up...but I digress.

The point of the above drivel is that despite his years of experience with photography...Mr Harding clearly lost the plot on this trip. Was he drunk or worse? Was it revenge because all the other anglers caught and he did not???? Maybe he was simply overawed by the presence of the International anglers???? Who knows? 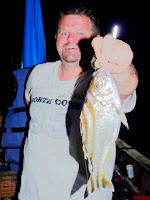 Andy's got a snapper by the way.

So, our conclusion? This trip took place on little tides..........very little movement. And the fishing was slow. The next trip will be on spring tides which I hope may be more productive.
Posted by OFFSHORE REBEL THAILAND at 7:16 PM