Fire lanterns on the Beach 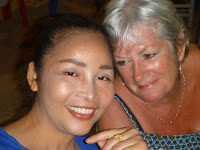 We are always trying to find a different venue for New Year's Eve here in Phuket. Earlier this year we stumbled acorss a part of Phuket we had never visited before and found some lovely beach bars. These were very simple affairs but the food was amazing and the views fabulous. So, way back in March, a table was booked and deposits paid.....and it was just as well as the beach was packed last night and we would never have got a table without being pre-booked. (Here's Janie Thorne and Kannika cunningly plotting who they are going to aim the first rocket at). 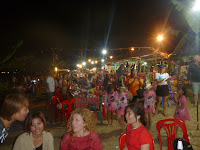 Plenty of people of various Nationalities were there. We were very fortunate to have some Germans by us who shouted at me regularly for my firework displays which, they told me, 'should not be allowed!'

We had a table right by the sea and were able to watch the firework displays going off all round Chalong Bay. Brilliant. The Asians are rightly renown for their amazing fireworks....we were treated to some real gems. 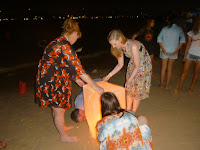 An important tradition on NYE is to let off Fire Lanterns, known as Kom Loieys. It's not that easy to get them alight in a stiff breeze and then even harder to keep them stabilised as they fill with hot air created by a ring of burning wax suspended on wire at the base of the lantern. The secret is to fill the lantern without setting fire to it as the body is just very flimsy paper. The timing has to be right as it is tempting to let the lantern go before it is ready and then it sort of hovers about a bit before coming back to ground and setting fire to whatever it lands on. They are of course banned as being a fire hazard and a danger to aircraft as some of them go extremely high before they burn out. 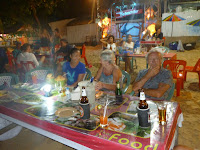 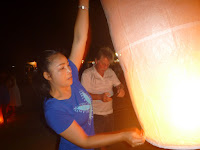 This is our beach table....see...very casual. Nice. Terrific variety of Thai dishes kept coming to everyone throughout the night.

Here's Kannika, with Dave Lovelock in the background, holding one of our Kom Loieys in readiness for lift off. 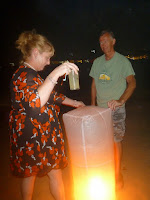 Mark didn't realise what a talented and soon-to-be-in-demand Kom Loiey holder. Here he is lending a calm British hand to assist a tremulous Scandinavia Maiden. Such courage. 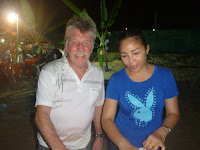 Dave has struck up a deal with Kannika so that he gets a cuddle every time he comes fishing with us in Weymouth. His bookings have escalated from a four day trip to Alderney in September to 5 trips a month....aha....such is the power of a charming Thai crewess. Dave rather likes it here in Phuket....and has booked up three weeks for December 2016. 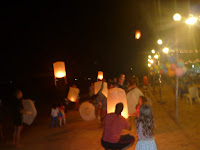 Kom Loieys were being prepared all along the beach throughout the evening. They are quite a sight as hundreds can be taking off at the same time all around the Bay....quite magical! 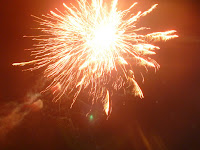 And, of course, there were fireworks....everywhere. There were some very impressive displays especially from the big hotels and resorts. 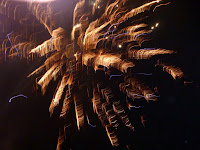 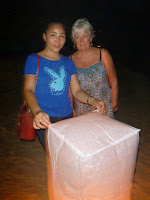 Janie and Kannika prepare to release our final Kom Loiey of the evening in what we all agreed was the best New Year's Eve Celebration we have enjoyed so far in what is now our 12th winter in Phuket.

Maybe it could be YOU here next NYE???
Posted by OFFSHORE REBEL THAILAND at 6:34 PM