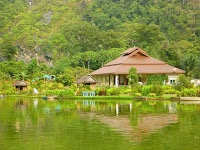 As always it is the stunning setting of the lake that first hits you. It really is magnificent. 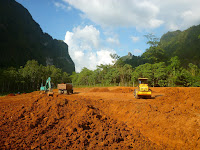 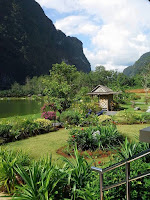 It's worth remembering that just four years ago we were watching the diggers at work when EFT was in its infancy. Mike is currently preparing ground set up from the lake for the first of three bungalows to be built. At the moment visiting anglers stay in a nice hotel in nearby Phang Gna but the plan is to provide quality accommodation with magnificent views to go with the beautiful restuarant that is completed and offering a full menu (first photo).


The contrast between the photo above and the completed gardens and grounds is immense. An array of plants and luxuriant vegetation make this a delight to just relax and admire what is truly an amazing achievement in such a short time. 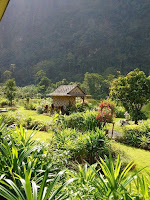 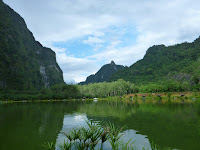 Set around the lake and in amidst ever increasing plant life are 16 chalets for the anglers set back a few feet from the swim which can easily support four rods set up on their electronic bite indicators.


This is a typical view from one of the swims. 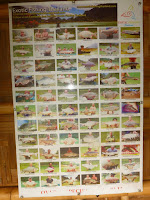 In every chalet is a chart detailing the 66 different types of exotic species from different parts of Asia and the Amazon available from the lake. Many of the larger fish are well over 100lb with a recently recorded Mekong Catfish weighing in at over 300lb! 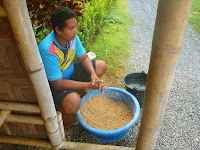 Guides are there to keep a watchful and expert eye on proceedings. Their assistance when bringing the fish into the net or cage is essential. They will also prepare the lam cage baits and cast for anglers if so required. Khun Ban is one of the latest guides to join the EFT. Here he is preparing the all important bait which will be moulded into a large ball and pressed into the bait cage. 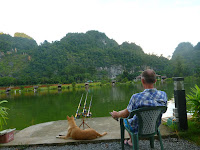 Mark, accompanied by EFT's friendly doggie,  awaiting the bites. Shimano Beastmaster Uptiders rods and Shimano baitrunners loaded with braid to a simple fixed leger rig presenting either fish or chicken baits, pellets and cage moulded lam according to the rod and targeted species. 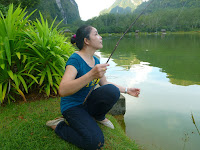 Live baits are also available for the predator fish and it always helps to have a skilful assitant to provide a steady supply of fresh livebait as required. Here is Kannika who is a consumate angler and who may be joining us in UK for the 2016 season aboard Offshore Rebel. 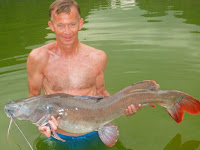 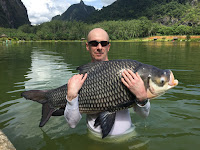 Richard Heaseman from Devizes, Wiltshire, with a Siamese Carp....35lb Kg

Mark with a Siamese Carp 30kg 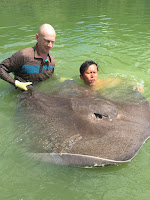 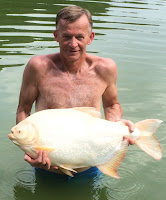 Mark with an Albino Pacu of 10kg

Clown Featherback. Current record 6.1kg and estimated at 8kg. This makes Mr Richard Heaseman the unofficial world record holder for clown featherback. However, records are no longer accepted by IGFA from these Thai lakes even though the current record was set in Thailand....from a stocked lake just north of Bangkok. This does seem a pity as Richard's fish will not count and the smaller fish will continue to hold the record. Politics, eh? well, we will all know about Fishing Politics on Dec 16th/17th won't we???? 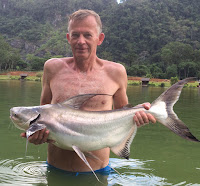 This was an excellent sized Alligator Gar  estimated at 20kg. It has a long snout jammed packed with ferocious looking teeth...which Richard did his best to keep clear of when posing for this picture. 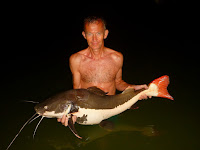 A number of these hard fighting colourful Amazon redtail catfish were caught during the mad feeding hour 1800 to 1900. Here is Mark with a fine specimen of 25 kg.


These weights were all estimated by the Thai guides.
Posted by OFFSHORE REBEL THAILAND at 7:27 PM