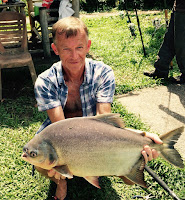 Wow.....our latest trip to the Phuket Fishing Park on Friday was manic to say the least. Within seconds of his first cast, Mark Butland was into a crazy fighting Pacu and this set the tone for the whole day. It was non-stop fish after fish with Pacu, Siamese Carp, Grass Carp, Red Tail Catfish and Mekong Cats giving us a five species tally. 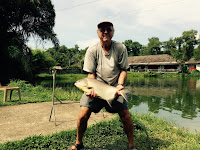 We had come armed with two set-ups each but this was soon reduced to a single rod as the pace was simply too hot to keep two set-ups on the go. This was definitely one of those precious fishing days that we all dream of....and it was happening for us! Well, not just our group...the fish were coming in thick and fast all around the lake. It was extremely hectic and exciting with the guides and customers alike running around with landing nets to assist other anglers. Here is Steve Thorne with his first Pacu of the day. 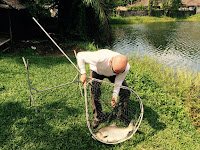 Pacu are fruit eating pirhana. They have the teeth that we have all seen in the silly horror movies when shoals of angry pirhana attack innocent folk swimming about in some highly dangerous part of the Amazon. They can chomp through the trace line with ease. We upped the traces to 45lb, we used the plaited fluro-carbon traces we had prepared for the Chaew Lan Lake snakeheads and even tried braid. Unless the Pacu was hooked in such a way that the traceline was clear of the teeth, there was no chance of bringing the pacu to the net. They never stop fighting. When they near the the net they seem to have an additional massive boost of energy and race off to the opposite side of the lake at unstoppable and uncontrollable speed. They are amazingly powerful fish and were all in the 3kg to 7kg range. 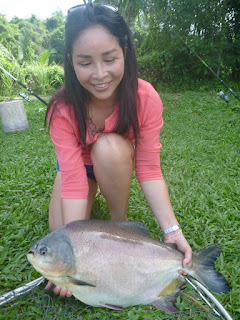 Kannika, the latest addition to our team, presents her first ever Pacu from the Phuket Fishing Park. She was using a Shimano rod/Grauvell reel combination with 25lb mono mainline to a fixed legered cage with a 3 foot 30lb mono trace to size 4 hook baited with folded breadcrust.

What a cracker, eh?

Mark, who has fished here several times now, landed no less than five Siamese Carp. It's good to catch one or two...but five! Plus a Grass Carp and numerous Pacu and Catfish. 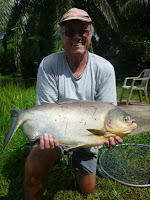 Steve Thorne with another one of his Pacu. Steve had decided to keep a running tally of fish caught and lost. I see his own record shows 9 Pacu, one Redtail Cat, one Siamese Carp, 4 Mekong Cats including the day's biggest at 15kg. In addition his record shows he was bitten off 21 times!!! 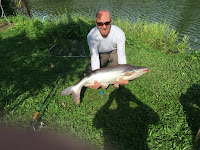 I have just taken Richard Heasman back to Phuket Airport. His holiday is over already. It has shot by and now he returns to a wet and windy Devizes and a 12 hour night shift starting on Monday.

But look what he has achieved in his two weeks here. Carp to 70lb! A Clown Featherback that was heavier than the current World Record. He has caught a giant freshwater stingray of over 200lb and achieved a Scuba dive which lasted over 70 minutes which is a remarkably long time on a single 12Lt tank which just shows how much he has improved since taking up Scuba with me three years ago. And now he was experiencing the best lake fishing of his life and was trashing the reels for a passtime. Here he is with one of his  Catfish. Richard's record shows 11 Pacu, 4 catfish, 2 carp and exactly 20 fish lost before the record taking stopped in the mid-afternoon with everyone rushing around flat out to keep up with the action. 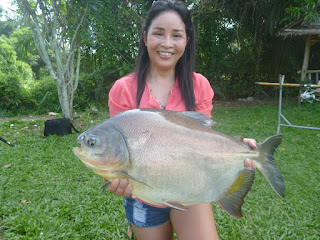 Just look at Kannika's Pacu. It's a monster and the biggest of the day at 7kg. It took ages to coax to the net and had frayed the traceline to such an extent that another run or two would have allowed it to escape. 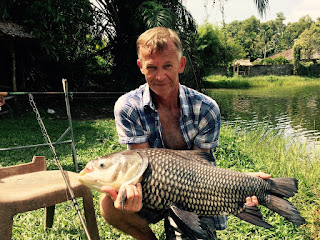 With so much fishing action, the photography took a back seat....but at least we managed a few nice shots of the fish.....and here's Mark again with another one of his Siamese Carp.
Posted by OFFSHORE REBEL THAILAND at 7:06 PM