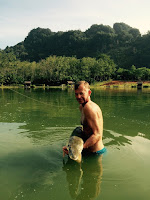 Two of our intrepid guests, Mark Butland and recently arrived Steve Thorne,  braved the early morning alarm call to head northwards at 0600 in order to break free of the attractions of Phuket and reach Mike Bailey's Exotic Fishing Thailand by 0800 on Tuesday 22nd Dec. Thoughts were with our colleague Richard Heasman who we knew would be half-way through his night shift after returning to  UK on Sunday.....poor chap!

Mark had a great start with his lam cage being crushed by an Arapaima on his very first cast and then latching into a 25kg Aligator Gar taking his lam bait and being coaxed to the net within the first hour.

A nice photo of Mark with his very impressive 25kg Alligator Gar. 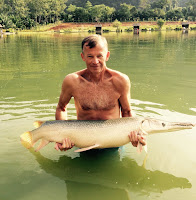 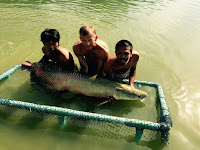 Within the second hour Mark had latched into the lake's much prized  species, the Arapaima, with the fish taking a triple pellet bait. This fabulous fish was estimated to weigh in at 60kg, so was well over the magic 100lb mark.

Mark said the fight was amazing with the fish displaying its awesome fighting strength throughout the 30 minute fight. 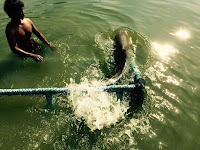 Here's a shot of the Araipaima being released from the cage (obviously many of these fish are much too big for a landing net). Before every fish is released it is given time to recover with extra aerated water being pumped into the cage.

Every fish is checked for any damage with iodine applied if needed. These fish are in tip-top condition thanks to this constant care. 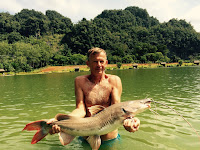 Mark's early run of good fortune continued with an Asian Redtail taking a chicken bait and coming to the net by 1100. An Amazon Redtail followed this, again on the chicken bait to make this a four fish tally by midday. 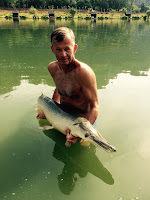 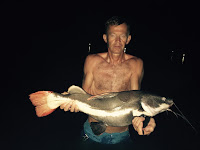 Then there followed a lull for nearly six hours with another Alligator Gar taking a lam bait at just after 1800 hours.


And lastly, to finish off a great day, Mark caught another Amazon Redtail on chicken bait just as night fell.


Our other explorer, Steve Thorne, had also got off to a brilliant start with an Arapaima taking his chicken bait and providing a lively fight for 30 minutes before it managed to take the line around one of the lake aerators. Undeterred, Steve's Gillie leapt into the lake and passed the rod around the obstruction allowing Steve to continue the fight. Unfortuately the Arapaima threw the hook just as it was being eased to the cage.

Unfortuately, as happens in angling, that was Steve's only bite for the rest of the day.
Posted by OFFSHORE REBEL THAILAND at 4:14 AM