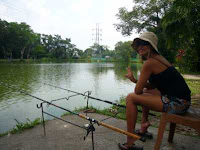 Time is running out for me......today was our last chance this 'season' to go fishing at the Phuket Lake. Japanese Ladies' Freediving record holder, Ai Futaki and EFSA President Horst Sneider were my prestigeous angling partners today!!! 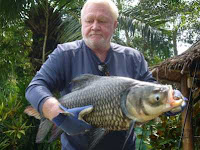 We had a pretty busy day. It wasn't long before Horst was into a nice Siamese Carp.... 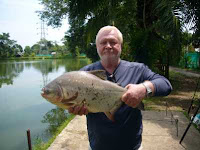 .....followed by one of these lunatic fruit eating pirhana fish which are definitely on steroids. These fish are mad and go racing up and down the lake....excellent action. 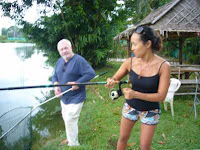 Here's Ai into her first fish with Horst acting as netsman... 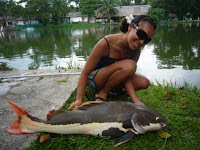 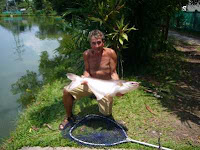 Old git Whittall actually caught a few fish today....5 I think!! Here's one of the catfish. 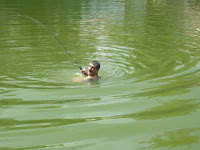 When yapping to the new lake owner, an Australian called Chris, and not paying attention...my rod was dragged into the lake by a fish. Chris dived in after it and caught the rod butt before it was dragged under....and then proceeded to play the fish whilst swimming back to the shore. Very impressive technique.....he's gonna go far, this lad!!


So, that's it for this year...no more lake fishing for me....but it was a great day's fishing to end on. Ai retired after 3 fish, the red-tailed catfish, a pirhana and a carp. Horst had 5 fish with 3 of them being carp and I had five......so 13 fish with most of them well into double figures and several over 20lb. We've had some terrific fishing this year.....Thank you, Phuket!!
Posted by OFFSHORE REBEL THAILAND at 2:42 AM