Dinner and Negotiations at Bonsai Restaurant 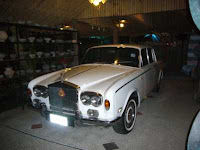 Last night we visited the Bonsai Restaurant in Chalong which is one of the most interesting places to eat as it is packed with antiques (including us last night).

We arrived in the Rolls Royce the restaurant send to collect guests (yep, guests as opposed to customers....you're treated in a proper manner). 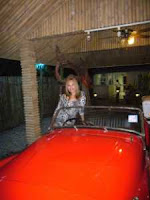 Jeff, having clinched a major building deal in Bristol, had bought his Thai wife, Om, a sports car which the previous owners had arranged to have waiting inside the Bonsai restaurant...which was a nice touch to the evening. 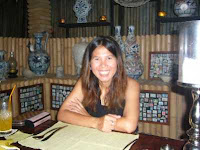 Jai is now waiting to negotiate a deal on some of the restaurant's antiques. Janey and Steve are antiques dealers/collectors and are always out for a bargain to take home....so The Jai was sent in to open the price bartering. 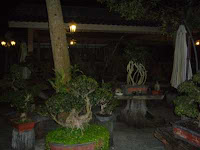 Meanwhile....not being interested in such high financial dealings, I wandered around the restaurant grounds..,admiring all the little Bonsai trees. It's a great concept for a restaurant....loads of valuable items set amongst an ornamental and subtly lit garden with guests seated in secluded corners enjoying an extremely original menu featuring alligator, croc, ostrich, snake, various fish ... 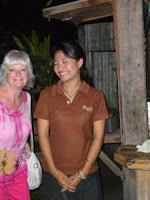 Janey..usually the business head of Thorne Enterprises...was intrigued to listen in to Jai's opening negotiations on the few items they were interested in. The staff thought Janey's stalking antics were most amusing. In fact, Janey looks positively meercatish in this shot....and it was noted that stir fried meercat was one of the more ununsual items on the menu.

It has often been said, when someone is sitting between Janey and Steve, that they are a 'rose between two Thornes' (Get it?? Jane and Steve Thorne??). Here they are with 'An old Urn between Two Thornes'. As can be seen, at this stage, negotiations had almost reached a conclusion and a serious offer was about to be offered. 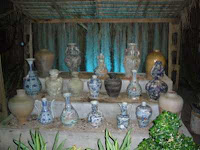 Success!! The Thorne Antiques Company have clinched a whole load of old crockery and here it is on display before being packed ready for shipping back to the UK. The whole lot was purchased for one million Baht (about £20k). Steve and Janey are delighted with an absolute bargain; the restaurant owners are happy as this lot cost 12 Bhat (26 pence) to produce in their ovens round the back....and so everybody was happy. 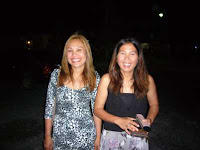 And so, back to the carpark...Om and Jai are laughing their heads off (as usual) after having received a hefty commission from the restaurant owners...and are looking forward to speeding downtown in Om's new red sports car to dance the night away at The Tiger Bar.

We English are off to the Sports Bar to watch the Arsenal V Man City match..

Ah, another quiet evening in Chalong......
Posted by OFFSHORE REBEL THAILAND at 5:14 PM