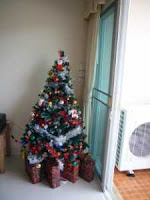 I have been berated for my slackness in maintaining The Blog over the last few days by my faithful Blog Followers. Apologies...this has been due to the time spend chasing Jai through Chalong Town on her nightly drunken outings....she is a real scamp at this time of year!

And so, Xmas Day, The Jai and I were fought over by our neighbours ex- sub-mariner Malcome and his charming Ukrainian Pole Dancing finalist wife Carol, who comes from some county called Devon, and Lt Colonel David and his wife Gai. Gai, as you all know, means chicken. Thai ladies are called after such creatures on a regular basis...especially useful when they become old broilers.

We (The Jai) and I had been ordered to the Colonel's house this year having hob nobbed with the 'low life' at Malcome's last Christmas. But first we nipped into Malcome's so Jai could see the splendid Xmas Tree and presents that had been prepared for the guests.

It ain't easy to get the 'stuff' required to put on a fine Xmas spread over here....and a massive effort had gone into both Xmas Dinners. 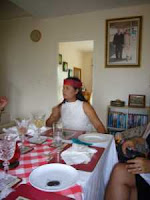 Anyhow, we entered the Colonel's superb Town House and were impressed to see four Thai 'servants'...well, that's what the Colonel calls them and how he refers to them when he's shouting at them for being useless...slaving over a selection of meats (turkey, hams, porks, sausages wrappd in bacon) and at least six traditional veg including the despised Brussel Sprouts (yuck....is there anyone who honestly like these fart inducing, smelly geen balls???) roast and mashed tatties, and all sorts of
stuffings and jellies. I mean; it WAS amazing......

Upstairs we were greeted by the delightful Gai (chicken, remember) who showed us to our named seats (the seating plan being carefully constructed so that the ex-Pat men were at one end of the table in order that they might talk about important stuff such as golf and fishing whilst the Thai ladies (wives and partners) were as far away as possible at the other end where they good gossip at how extremely lucky they were to have encroached into polite European Society and who had the biggest car, shiniest ring, most dresses etc...you know the sort of stuff. 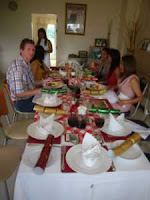 Ah, the pleasures of a well presented table under the formidable and ordered control of a man, Colonel David, who believes in the maintainance of standards. Excellent.

It was a womderful dinner and fascinating conversation. I must point out that I met a gentleman named Peter at dinner who is an International Marine Lawyer and Broker. It is he who has just managed (after 2 full years of negotiations) to sell off Condor 10 in Weymouth Harbour for a measley £6.5 million to the South Koreans. So, maybe Condor 10 has gone....but if not, it will be when the weather allows.

This will come as a massive shock to a certain member of the Weymouth Commercial fishing fleet whose own boat has been known to attempt to mate with Condor 10. 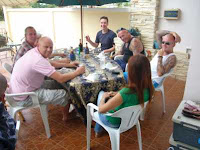 It was important for me to pop downstairs and next door to see how the Lower Classes were spending their Xmas Day. Here, on the left of the photo, you can see Jeff (the Bristol Faery) and then International Lothario, Keith from Aylesbury.

The other lads on the right, with tattoes, are young entrepreneurs from the 'London' area who are over here in Thailand making themselves a deserved fortune through the clever exporting of quality imitation goods into Europe...you may well be wearing some item of theirs right now! Neil, with sun glasses on, has been my dive student for the past few days...an excellent and highly motivated young chap who is already a £millionaire at 27 through his own efforts... 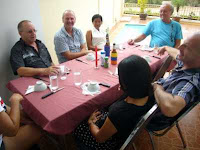 In this pic we have Crusty Steve at the Head of the Table. His wife, Janey, is rarely to be seen as she understands her duties to her husband and was usually in the kitchen fixing her beloved another G and T. The other lads are Irish and, I kid you not, are wonderful musicians. Jimmy, wearing glasses, does the most poignant version of 'Waltzing Matilda' (you know, that brilliant version by The Pogues ages ago) and other traditional Irish songs accompanied by the other lads on Irish Whistle and Irish Drum...excellent!!!

It was a spendid day..starting at 1 pm and finishing about midnight and our genuine thanks go to our hosts for their generosity and for inviting us again this year. 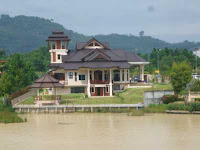 A new and rather quaintly modest house has gone up just two 'doors' away from us. It has been built in a style to replicate one of the Royal Houses. I do not, as yet, know who owns this mansion but I am expecting him to enter the fray for our Xmas Day favours next year....

Posted by OFFSHORE REBEL THAILAND at 3:47 AM