Breakfast with our neighbours.

Gary and Mandy left us at 0500 this morning. There wasn't much point going back to bed as
The Jai and me were being taken out to an early breakfast!! 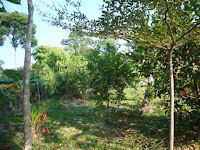 Behind the house, some very serious construction work is going on. A dam is being built and reservoirs being prepared. The three year plan is establish a large area of man made lake which will supply water for this part of Phuket but will also provide angling and sailing. It's an ambitious project but it's well under way. This will mean we have golf already next door and then two additional activities to offer as well as being close to two main temples. There is also a Nature Trail and the elephant safari has returned. We have been very fortunate in buying the house in this particular location with so much going on.

Today a new Thai house was being blessed. The house is built as a 'summer retreat' for the Village Leader, Khun Poo Yai, and his family. Because of the Temple guide book I have written, I have met a lot of Thai people and, because of this particular family's status, the Head Monk of the area, Pra Maha Pongsak, was to be one of the five monks giving the house blessing. I am due to hand over the Guide booklet officially tomorrow to Pra Maha Pongsak so it was also a good time to meet him on an informal basis. 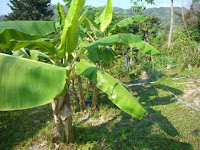 The new house, which the family tell me will be available for us ('us' being you guys coming to stay) if we wanted a little adventure and spend a night up in the Nagerd Mountains enjoying fantastic views down to Chalong Bay, is set amongst a lot of mountainside land. There are many fruit trees and plants already well established including banana trees. Many of the things we enjoyed for breakfast came from the garden. 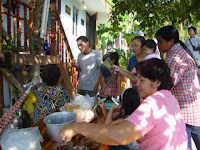 Family is very important to Thai people. They are a very close knit society and love to cook and eat together. There was cooking taking place under the house as well as in the actual building. 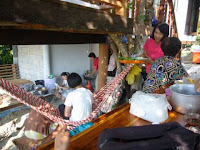 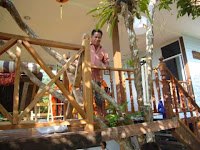 Wat Chalong has just finished its annual 10 day Festival. It's a massive affair with hundreds of stalls and thousands of people attending every night. This gentleman, Khun Rasada, was elected by the people in Phuket to be the Chief Organiser of this prestigeous event. He told me (in Thai, of course) that he was....knackered!!! (Please don't re-elect me next year for this job) 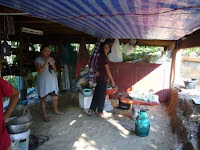 The ladies are cooking under the shade of the house. Many Thai houses are built on wooden 'stilts' or concrete pillars. This keeps the property safe from ravaging King Cobras, highly toxic scorpions, the Greater Banana Bunion eater and other such highly dangerous animals that scurry about on the forest floor. We don't get to see any of these things in this house as Thai creatures don't think much of Ferangs (foreigners). But, with the house set up on some sort of structure, there is a big shaded area underneath...ideal for cooking ...as long as you don't set fire to the wooden floors overhead. 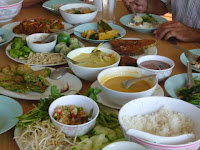 Thai food is justly renown for its colour, variety of tastes and freshness. Breakfast included many different dishes. Thai style is to fill the table with many different foods and everyone helps themselves to a bit of everything....different to Western Style when you have your own 'choice' put on your own plate and just eat that. 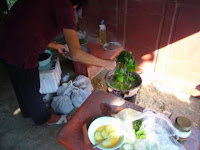 Down under the house, the food was still being cooked and sent up to the VIP lounge above!! Jai and I were up there being treated very well indeed. 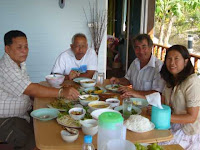 On the left is Khun Poo Yai. He is the Village Chief and a man of massive importance and influence. His family own stacks of land including the land that the Phuket Nature Home project is built on which he sold at a monstrous profit. In the middle is Khun Gai who was one of the first Thai men I met here. He is part of this large family and has a few shops and resturants as well as several houses 'up the mountain'...then there is the visiting low life charter skipper, Whittall, and the famous crewperson, The Jai.
Thais believe that if you do good and if you think good, then good will come to you in return. The reason for writing the Guide Book was because there's very little explained in the English Language in Wat Chalong and it is a fascinating place. So, it made sense for me to write a guide booklet in English and hopefully provide some insight into Thai Temple Culture and Thai culture in general for English speaking people. The booklet has been very well received and it is as a result of it that I am having the opportunity to meet many members of the local Thai society that I would not normally have had. They are very pleased that a Foreigner is interested in their culture and motivated enough to write a little book about it. So, because I have 'done good', I am certainly getting plenty of 'good' back!
All good fun......................
And now Jai and I have 2 days to clean the house from top to bottom (well, Jai and her Thai lady friends as I do not intend to do any house work now I am so important...ha ha ha) before we fly to Bangkok on Tuesday. There we are meeting Derby's mama and papa and staying with them for four days to provide a Bangkok City Tour! It will be good. Jai knows the City inside out and we will be able to provide our guests with a memorable experience....and me and The Jai are going to see Eric Clapton in Bangkok on 16th!! Yeah.....'she don't lie, she don't lie, she don't lie.....Cocaine...'.
Meanwhile, when we arrive in Bangkok, Derby himself arrives at exactly the same time in Phuket airport....pretty clever timing, eh? Crafty buggar...leaving me and Jai to look after his mum and dad while he and his partner and daughters swan about the pool and beaches.....
Yo Ho.....better get the dustpan out now...and pass it to one of the many Thai ladies laughing at me.
Posted by OFFSHORE REBEL THAILAND at 8:05 PM