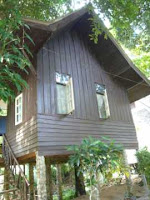 The Thai word for Adventure is Pajonpai. Gary refuses to accept this and calls it Pigeon Pie...so here is the latest 'Pigeon Pie'!

It was about time we left the 'lap of luxury' and return to basics and Nature. So we set off to the Koh Sok National Park which is about 120 miles north of Chalong and 100 km north of Phuket.

The park is enormous and is set in the heart of one of the last remaining rain forests in Thailand which features imposing Karst mountain formations running through it. According to the literature, these mountains are the remains of an enormous coral reef formed 250 million years ago. The 'reef' runs from China, then through the north eastern section of Vietnam in the famous Halong Bay and southwards into the Gulf of Thailand. The Karsts break out of the sea all down the eastern coastline of Thailand heading southwards and then heading to the south west across to Phuket and down to Krabi. 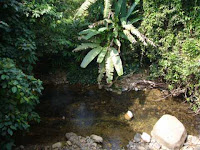 The accommodation in the park consists of 'tree houses' set right in the forest. It's nice to sit out on the balconies and listen to the many sounds of nature as the forest is full of various species of birds and monkeys especially gibbons.

As in all nature watching, it's all about being quiet and still and keeping a sharp eye out. The house balconies are good view points (this is the view from our our balcony) so it is possible to see animals especially early morning. 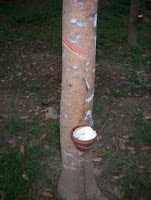 Some of the park has been replanted for rubber trees. The resin runs down the tree into the little cups and collects as the white, smelly stuff that will become rubber. 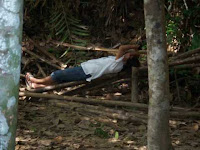 The forest is full of bamboo. It is a known fact that if a Thai person does nothing for 17 seconds they will fall alseep. The Jai can sleep anywhere.....here she is the land of dreams (Thais dream of elephants, snakes, monkeys and spirits) whilst we were enjoying a swim in the river. 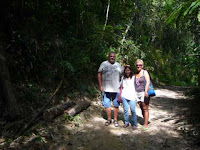 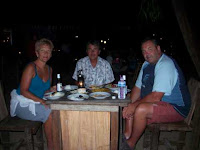 Food was available in simple little resturants which offered Bar B Q'd fish and chicken dishes. Our evening meal (which was delicious) cost us £15 for the four of us....and that included the beers!


Koh Sok was just a stopping point for us as our main adventure was yet to come at the Cheow Lan Lake about 50km further east......tomorrow's Blog will be about that as we are now off out to Wat Chalong, the nearby Temple, which is holding its annual festival this week.
Posted by OFFSHORE REBEL THAILAND at 8:28 AM