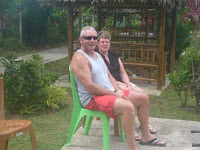 Today was going to be the Jean/Graham Versus the June/Graham Grand Fishing Competition. We've already had several golfing tournaments...so the team were very excited about this new challenge.

The favourites were our June/Graham team as Graham had proved himself to be a nifty striker a couple of weeks ago at the same venue. 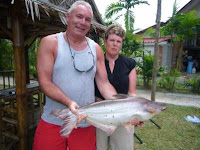 But, as dawn broke and we were awakened by the monks next door chanting yet more blessings (well, we need 'em), the sad news came from above that June had been disabled by the dreaded 'trots' and would be unable to concentrate on her fishing...which as we all know requires a good deal of bending under strain....not a good idea in the circumstances. 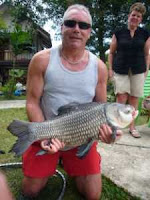 But undeterred by this natural disaster, Jean and Graham decided to carry on with the day's plan...and for both of them this was their first ever attempt at lake fishing.

We got off to a flying start with a couple of catfish and a nice Siamese carp in the first hour.....but then we descended into a lengthy lull broken only by losing fish into the weeds or getting 'bitten off'. There was also an impressive amount of casting high into the trees...quite amazing how much foliage became snarled up on our duo's hooks. Leaves, branches, weeds, rushes...this pair are definitely the most inventive when it comes to casting techniques. I was extremely grateful for the bamboo shelters provided around the lake as places that I could duck into and hide when casting took place. 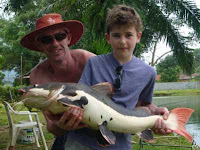 In the next swim were young Max and father Henry from Warwickshire. They had a magnicent day and could not stop catching....they reckoned they landed 30 fish at least....everytime we looked they were into fish. And this is the first time I have seen a red tailed catfish and a domehead catfish come from this lake. They also caught pirhana and carp. Here's young Max with a redtailed catfish. 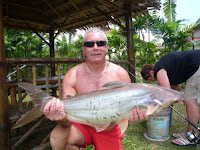 But then, as often happens with fishing, we started to get a few bites and five more very nice carp and catfish came to the net. 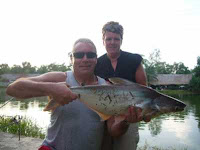 Our novices did us proud.....3 carp with the best one at 30lb, five catfish to about 15lb, 17 branches, 182 bank reeds and an array of flora and fauna were all hooked and returned safely!

Posted by OFFSHORE REBEL THAILAND at 4:23 AM