Electric reels in The Similans 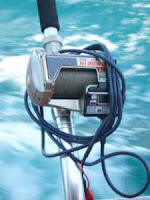 The seven Similan Islands lay some 50 miles out in the Andaman Sea to the west of Koa Lak which is 50 miles north of Phuket. The name may ring a bell with some of you as this area was very badly hit in the 2004 Tsunami.

Much of our fishing over the three days took place another 5 miles or so further west in depths ranging from 150 to 220 metres and we needed a fair bit of lead to get the two hook paternoster rigs down to those depths.

Our fishing guide, Mr Moo, the Phuket equivalent of Alderney's Mark Harding, is an angling fanatic and full of enthusiasm. He provided all the tackle for the four of us and himself on the trip. This cost £50 each for hire of the tackle. You could bring your own but it would be virtually impossible to carry all the stuff required on the plane and the gear was top quality and very expensive. We used four different set of gear over the three day period. 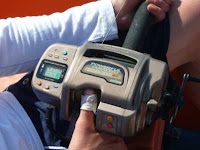 These electric reels cost between £600 and £1,200 each depending on make etc and were loaded with 1,500 metres of 80lb braid.....very expensive if there was a snap off due to the very snaggy bottom being caught.

Controls were simple to use...basically a 'let down', a 'retrieve' and a fast rerieve (used on the strike) buttons. There were a whole range of further tuning controls but those 3 bttons were enough. The drag system was a simple star drag. 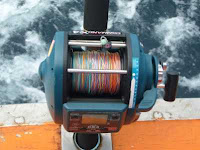 The reels also had depth metres on them which was very useful especially on the retireve. We had four Thai crew on the boat and they stayed with us until they were sure we had mastered the reels. The main problem is anglers not watching the retrieve and keeping the reel in power wind...and jamming the first swivel into the rod tip. Result of this is either first ring destruction, rop tip snapping or the reel getting jammed in gear and in danger of a burn out. It's very hard to get the reels repaired in Thailand. 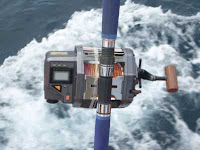 I guess it's up to each of you if you are in favour of an electric reel or not. I have never used one before....and I wasn't too keen to start with. However, the alternative would be to use a twin speed reel like a Shimano Beast Master. And 220 metres is a very long way to bring your gear up for a bait check with the 2lb (or 3lb) lead required. And try going it with a double figure fish or two fighting back. 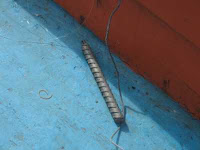 Coral reefs are very snaggy....so the weights used are like this....bar cut to weight. Set on a rotton bottom...simple but effective

It's better to fish a few turns off the bottom and keep a tight control on the line because when the boat swings (we were at anchor for much of the time...yes, in 220 metres) then the depth varies considerably. Thus the rods were placed under constant pressure. 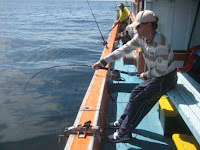 Here's Richie bending into a hefty fish.....but no problem as the reels are very powerful bits of kit. You just get the drag set right and...hang on!!!!! 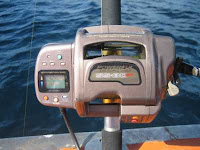 The reels were all different makes.....if you click on the photo then it will enlarge within the Blog and you tackle enthusiasts can see for yourselves the make of model of each reel. 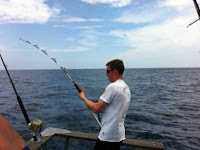 Here's Keith bending into a fish.


The great thing about this trip is you could fish as much as you wanted...all night if you could keep awake. It's tiring and the old Thai fishing boats do rock and roll. You may also see how low the gunnels are set and that there are no safety railings....so you have to keep alert and maintain your balance. It's no good coming on such a trip and then spending the whole time whining about safety etc....the Thai's will just laught at you. 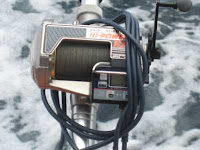 After this trip, I am converted to the using of electric reels when fishing in such depths. It would be too exhausting, especially in the 30 degrees+ heat, to keep fishing for hours with a non-electric reel.

So, a very good new experience................an done that I hope some of you will be able to experience when you come here for your winter holiday.
Off out now....with John Pearce...charter skipper who left UK 25 years ago and worked for Wahoo Gamne Fishign for a long time but currently runnign a superb Game Boat owned by a wealthy gentleman from Singapore. John's come back from a month chartering in the Andaman Islands catching marlin, giant tuna and sailfish.
Prices for his charters are astronomical (£2k per day)...there's no where I will ever be able to go on such a boat trip...but tonight will be a great evening listening to his adventures.Tomorrow I will do the Blog section on the actual trip we did and the terrific fish we caught....we MUST do more of this fishing...but it's all up to you chpas when/if you come if we can get such another triop together.

Posted by OFFSHORE REBEL THAILAND at 3:41 AM