Today our intrepid angling guests opted for the first session of this new 'season' at the Phuket Fishing Park.

We arrived at opening time...0800...ready to fish the whole day until 5pm closing time. Tackle prepared, extra bait bought along, sandwiches and a cooler box of drinks....we were ready..but would the fish oblige??

Our first casts resulted in immediate takes catching our men completely by surpise. Crack-offs, tangles, over runs, bite offs....fish lost....it was a wonder to behold. such skill! Such mastery of the ancient art of angling. The Thai Fishing Guides and I were bent double in mirth much to the misery of our angling heroes.

But then, as our chaps settled down and learnt how to cast again without blasting the bait over the trees, Mark Butland struck into the first properly hooked fish. Our target species was Siamese Carp...would be be lucky? 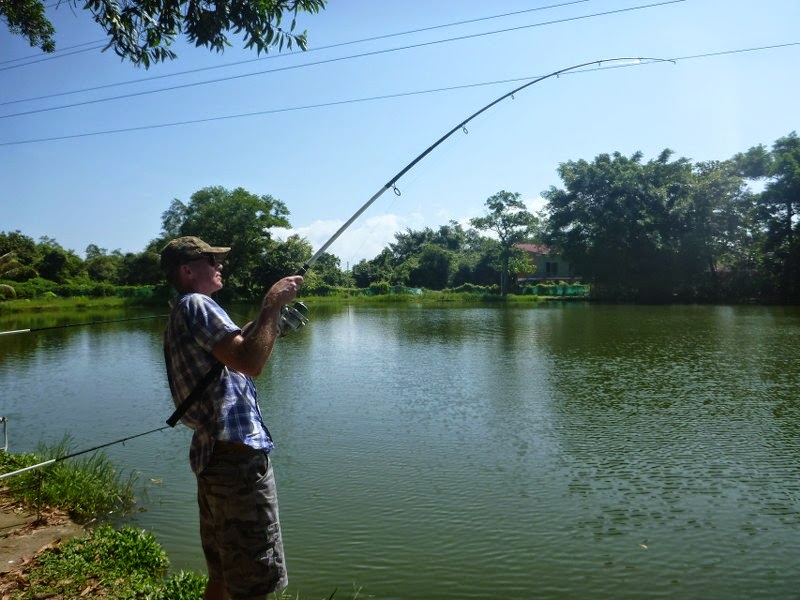 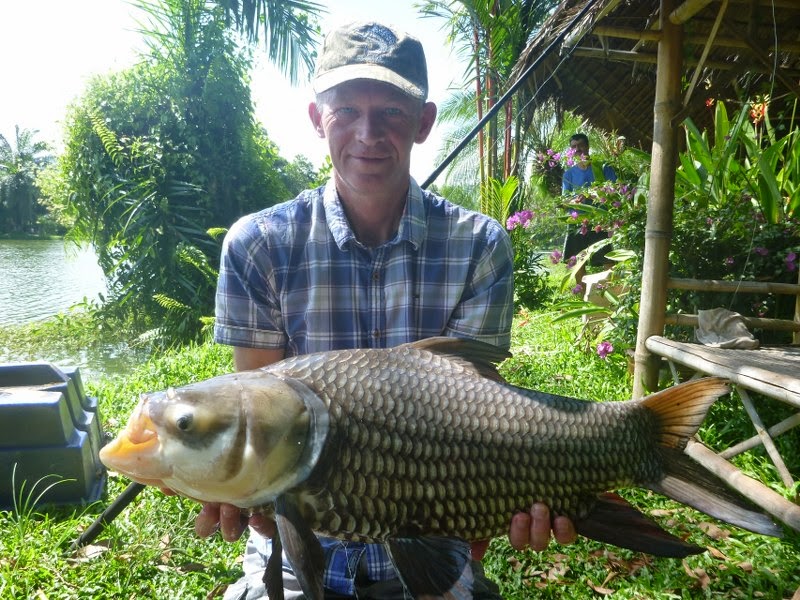 Mark Butland bends into the first fish and yes, it's a good carp. Success

Tackle was Shimano and Grauvel rods with Grauvel reels loaded with 30lb mono. We were asked to use heavy line because of the size and power of the fish in the lake. throughout the day we did lose several fish with the mainlines breaking but this only happened when the over enthusiastic guides grabbed hold of our rods and gave the fish far too much pressure. There's no way we should lose anything with this sort of powerful tackle unless the traces were bitten off by the pacu (fruit eating pirhanas and full of teeth!) 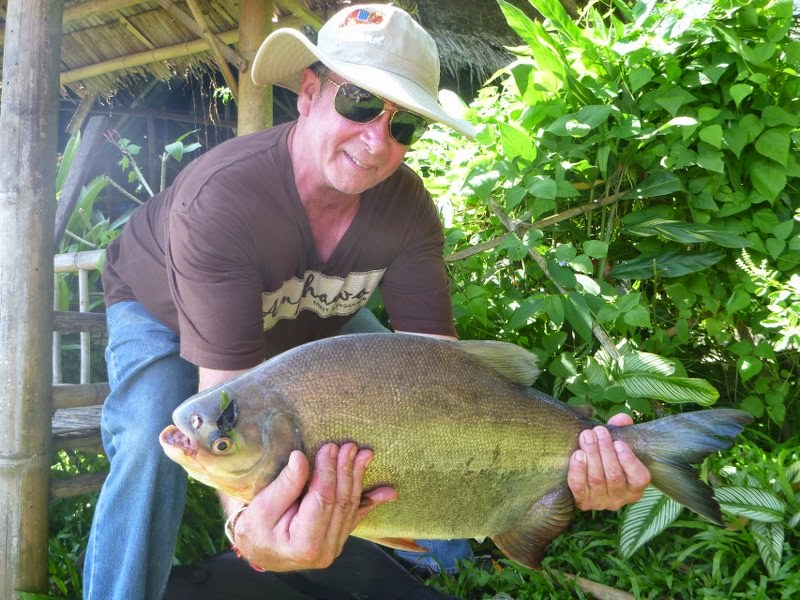 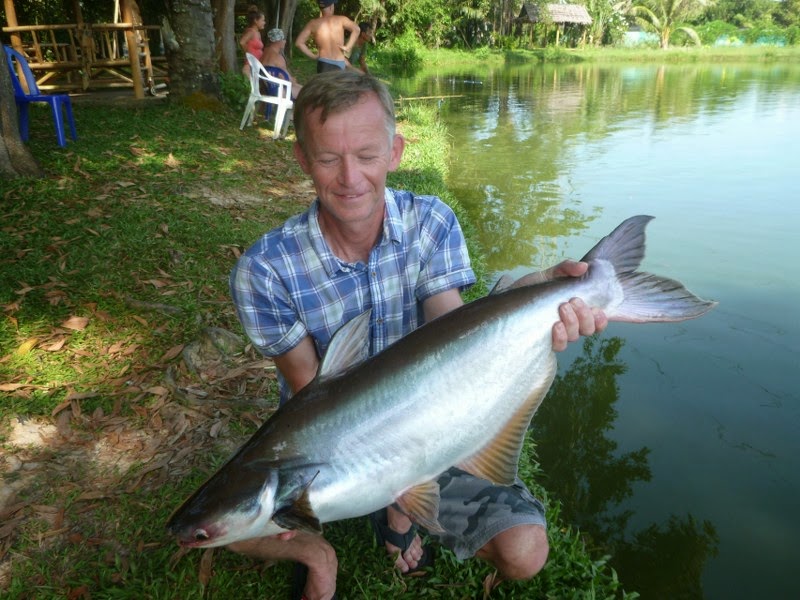 .Jeff Whittard landed several pacu and was bitten off by several more. These pacu are on steroids! They belt up and down the lake and fight right to the net....mad! A steady run of catfish came to the net keeping the rods busy....here's Mark with one of the catfish. 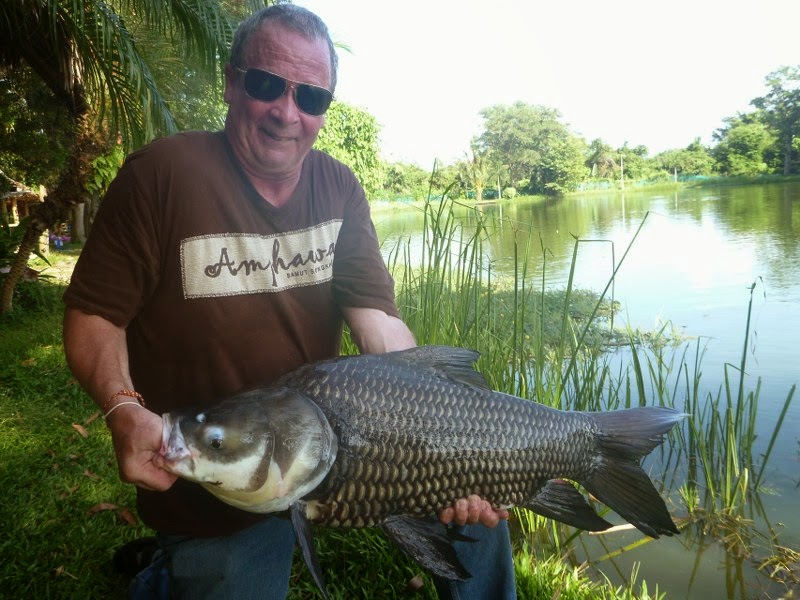 We were very lucky as we all caught carp...much to the bemusement of Chris the Australian owner who couldn't work out how we could connect with our target fish. I explained that Jeff Whittard was a carp specilaist and was the Bristolian City Champion for several years as well as the British carp record holder for a year and who gave talks on carp fishing to clubs throughout the UK. Chris seemed to believed this and the Thai lads were amazed that they had such a celebrity in their midst. Once all the bowing and scarping had finished we were able to get on with the fishing...... 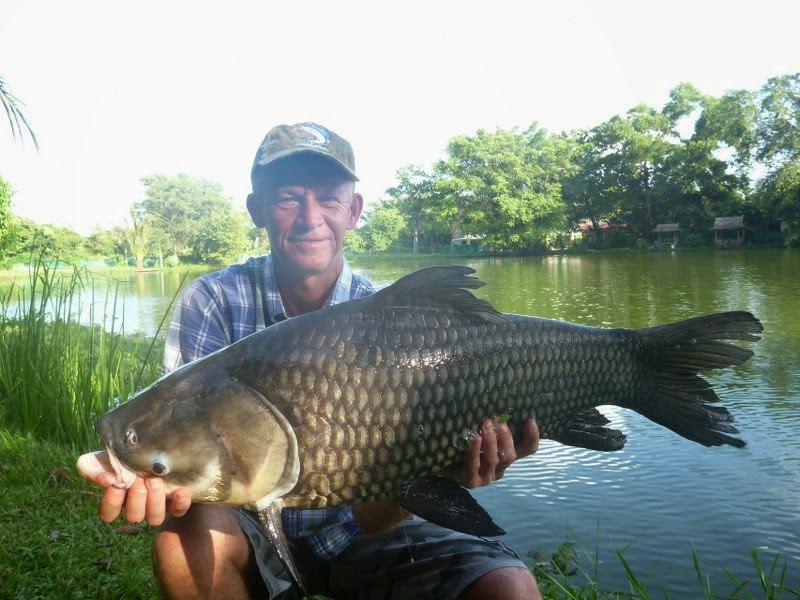 .....allowing Mark to get into the best carp of the day which was estimated at 40lb. All the fish were taken on bread crust fished under a bait cage. We've tried lots of different baits in the past but it's always the bread crust that works best. 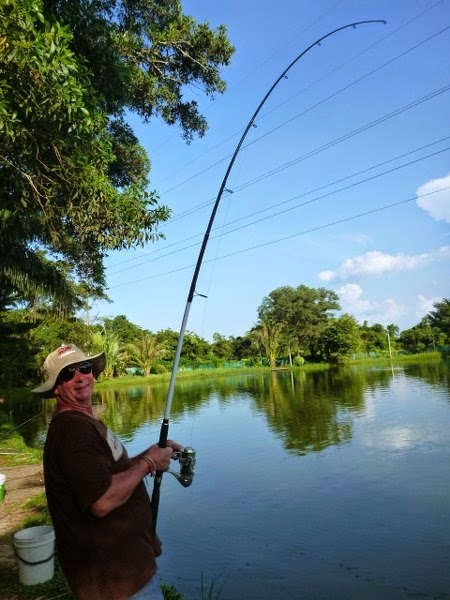 And here we are with Jeff bent into another fish. It was a really great day out. Stacks of fish coming in all around the lake. Our group was split up around the lake....and of course none of the photos came out on the camera used by our other team of three.....typical, see. Without me, they are all lost!!

Tomorrow is set aside for diving....which will be our third day underwater already. I have two lads who have dived just a couple of times. It's always great to see the first reaction to the wonders of Kata.


Posted by OFFSHORE REBEL THAILAND at 5:23 AM