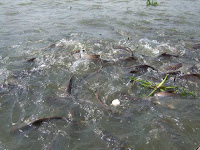 A Ride down the Chao Praya River in Bangkok

Early this morning our family flew off to Bangkok to finish their holiday with a couple of days in the City. Warren, being a wizz kid with the old Technology, sent me through these photos of what they've been up to today! Clever gadgets, Blackberries!

First the river...it runs through the centre of Bangkok and it is LOADED with fish.....zillions of them....


The Chao Praya River has many fabulous sights to see along its river banks. One of these is the Royal Barge Museum. 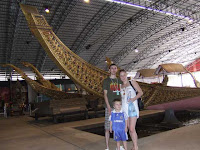 The Royal Barges are decorated with exquisite and complex carvings depicting scenes from Thailand's rich mythological past.
Here Warren, Hayden and Louise pose by one the craft used in Royal Processions down the river. 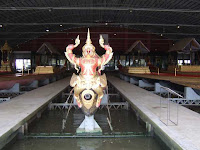 Amazing characters from the Ramakian (Thailand's great epic story taken from the Indian myth the Ramayama) act as figure heads on the Royal barges. 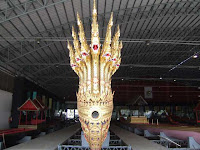 The seven headed Naga can be seen everywhere in Thailand and is often seen behind the Buddha. The Naga is a powerful, benign and protective spirit. Nagas are especially numerous in Temples (Wats) where they can be seen coiling up stairways and protecting entrances.
Most Nagas have only one head...the 7 headed one is THE prince of Nagas. 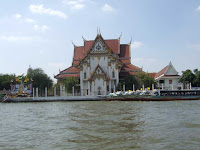 The temples viewed from the Chao Praya (River of Kings) make a colourful and imposing sight. The river night trip is amazing with the Temples all lit up. If you ever get to Bangkok....you MUST do the river trip at night!!!!! 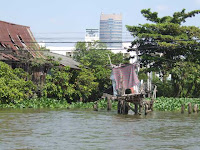 Bangkok, like many Asian Cities, is a City of extreme contrasts.
Top grade Hotels can be seen as a back drop to simple river dwellings.

Contast the river dwelling above with this scene on the other side of the river! 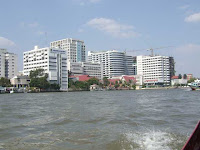 Tonight our intrepid holiday makers make thier way to Bangkok airport for their midnight flight back to Heathrow. We are told it is minus 4 degrees!!! Bit of a shock from the current 30 degrees in Bangkok and 32 degrees in Phuket!!
Happy Flying Warren, Louise, Leah, Hayden....and of course Grandma and Grandpapa Clare and Tony.
It's been a very different experience with a family staying here....the house swimming pool was certainly kept busy.
Tomorrow is a VERY different day. Jai and I are off doing Wreck Penetration diving on the King Cruiser wreck a few miles south of Phuket. Jai is also doing an EFR (Emergence First Response) Course as I need her to be well trained JUST in case!!!
Lots of diving photos tomorrow from the 3 dives we will be doing over a 12 hour day. Now THIS is what I came to Thailand for....and I hope that many of you reading this will be inspired to have a go when you come here!!!
Happy New Year, eh???


Posted by OFFSHORE REBEL THAILAND at 2:37 AM