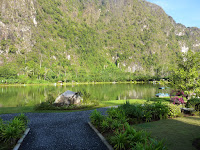 The first problem one encounters at  Exotic Fishing Thailand is the lake restaurant. I mean, why would you want to leave it?? The view is spectacular, the food is exquisite with the chaps saying it was the best they had experienced in Thailand and the service is charming and friendly. What's not to like??

But we are here to fish..so ever onwards into the beautifully manicured surrounds of the lake itself. 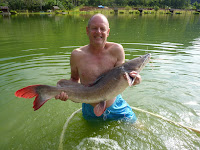 Our England International, Ray Barron from Southampton was the first into a fish with an Asian redtail catfish on his third cast. 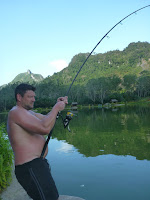 Russell Shaw from Bournemouth leans into a good sized Siamese Carp of around 20kg. 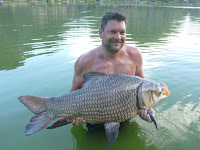 Russell's Siamese Carp which was estimated at 20kg 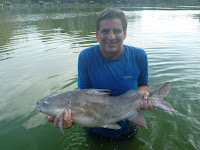 Mr Bellamy was concentrating on the various species of lake catfish. After some discussion it was decided that his fish shown here was a rare Salween (because it is found in the Salween river in North Thailand) Rita catfish. John also caught an Amazon Redtail (8kg) and an Asian Redtail (15kg) 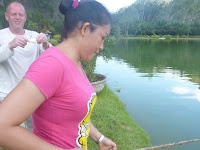 A good supply of livebait as required was provided by Kannika.... 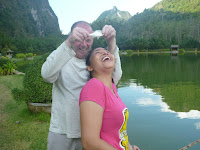 ......who also provided Raymond with suitable flirtatious frolicings during the quieter moments. 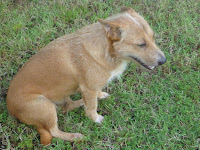 For those of a more serious nature, lake owner Mike Bailey provides a very tame doggie for animal lovers to talk to and pet. 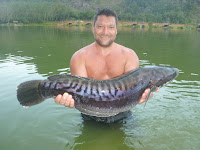 Readers....you may recall the wild expedition deep into the upper reaches of the Chaew Lay lake in search of snakeheads where Yours Truly (ha ha) managed to dominate the catches with a fine specimen snakehead of nearly three ounces. Well....here is  Russell with a much bigger snakehead which must be one of the hardest fish to hold as they are seriously slipperly. Thankfully this very beautifully marked fish kept still long enough for a photo. These, like all the lake fish, are in superb condition and fight like demons. 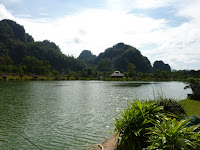 As the day progresses the large mountain that forms the very dramatic backdrop to this lake casts very welcome shade across it from midday onwards. There's the restaurant in the distance across the 10 acre lake. 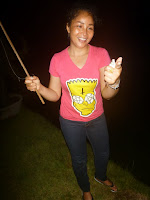 As darkness falls it is important to keep the fresh baits coming....as they MIGHT give an edge over the frozen scad baits. 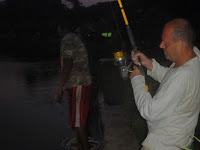 It had been a very hard two days for us although several arapaima had been caught by other anglers spread out around the lake. Ray Barron described this form as fishing as akin to Game Fishing at sea when lengthy periods of inaction are punctuated by adrenelin seering runs from very powerful fish. Throughout the day lots of fish raced off with the baits, appeared to be temporarily hooked and, just when it seemed proper contact had been made, dropped the baits. There were some impressively emotional displays from our men as fish were lost but Southampton's John Bellamy took first prize with his war dance and raucous wildlife scaring cry as he lost an arapiama towards the end of our session. Such was his theatrical rendition that the dancing girls 100km away in Patong must have thought a true warrior was on his way to them. 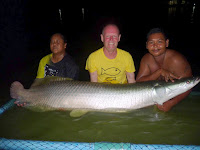 As we all know you must NEVER give up in angling. You must fish right to the very end in the hope that it will all come good. With night now upon us and the time edging towards the final whistle, Ray acrobatically stood on his carefully prepared final scad bait and flattened it. With no time to prepare another bait, Ray lobbed out the strange looking mess he had created and.... yes.....within seconds of it landing an Arapiama took it and raced off into the darkness. These fish are amazingly powerful with Ray saying that now he really did understand why everyone wanted to catch one. He experienced a fierce and testing fight from the fish which is always harder to control in the dark. After quite a number of heart stopping moments the fish was guided into the cage with our guide, Phan, telling us that the hook was now on the verge of being thrown and one more run would surely have seen the fish escape.

But wonderful....we got what we came for and congratulations to Ray for catching it.With all his angling travels and experiences this was the biggest fish Ray has ever caught and was estimated by the staff at  being in the 75kg - 80kg bracket.
Posted by OFFSHORE REBEL THAILAND at 6:29 PM