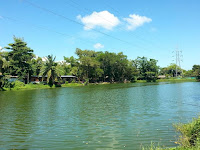 EFSA England Shore star Dave Lovelock from Wiltshire managed to get one last day in at the Phuket lake before having to return to UK yesterday.

Fishing has been amazing for the past few weeks but it is now slowly returning to normality. We assume the fishing has been so extraordinarily productive because we have discovered that the fishery had been closed for 4 months. There is a new road leading to it now so I imagine that would have effectively shut down the access during construction. There is also a shiny new roof over the restaurant section so that will improve the dining area. Anyhow, here's Dave with one of the day|'s Pacu. 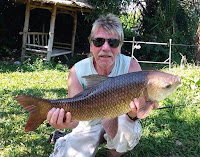 We are starting to see more of these Hovens Carp which is a strikingly beautiful fish. All the fish are taken on legered or floatfished bread flake suspended under a feeder cage crammed with a bread/rice/pellet mix. 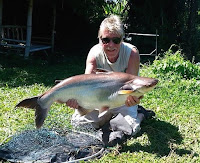 Dave caught the best of the Mekong catfish with this very deep bellied and hard fighting specimen.

I have to say I fear for the future of this lake. I was offered a 50% share in it a few years ago but I know trying to do anything in Thailand is fraught with uncertainty. Ferangs (foreigners) are often here to provide the money and then, when they are of no use anymore, forced out of the business and often end up with nothing to show for it. It is a shame as I would like to take it over and make it into an attractive and well run venue...but I do believe that would be an impossibility. In the meantime we shall continue to enjoy our days there and hope all will be well and it continues to provide good fishing. 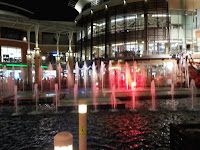 Amusingly quite a few guests ask me if there are any shops in Phuket or if they should bring their own soap and toothpaste from the UK etc. Well, allow me to reassure you all that Phuket offers everything for the serious shopper ( we were, for example, looking at £2m Sunseekers and Princesses at the Phuket International Pimex Boat Show Show yesterday....well....we were looking at the Thai models showing us around them more like) and here are a couple of photo's from David's last night when we went to Patong for dinner and a stroll around the famous Bangla Road. 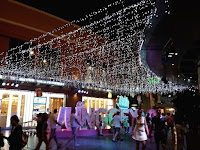 You can see that Phuket offers glitzy shopping malls and, for the discerning diner,  top quality £100 per head restuarants  as well as very cheap little beachside eateries from where wonderful meals for under £5 can be bought and verything inbetween. 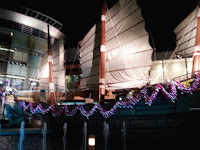 The actual name Phuket is believed to be deprived from the Malaysian language 'Bukit' which means hill as this is what Phuket looks like from the sea. Scholars counter argue that the name comes from the Thai language with Phu meaning mountain) and Ket meaning jewel... thus Phuket. It  used to be  called Jung Ceylon on some of the early Western Navigation charts. We were at the Jung Ceylon shopping centre in Patong which is a great place to explore with numerous restuarants, cafes, and shops. There's even a full Chinese Junk as part of the 'decorations' and in keeping with the name 'Jung' although that is a play on words as Jung Ceylon is a corruption of the Malay words Tanjung Slang which means Cape (Telong) Salang. Ah....such is the way the history of a place is revealed though its current and previous names. Words...fascinating creatures, eh? 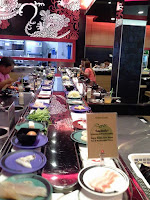 The 'all you can eat' Sushi restuarants in Patong and at Tesco Lotus big shops are extremely popular eateries and will set you back about £7 for endless trips to the buffet, all the soft drinks (not alchohol...that costs extra) you can manage plus fruits and ice creams. You get an hour and a quarter in which to gorge yourself....after that you are fined 2 baht (4 pence) per extra minute that you overstay. 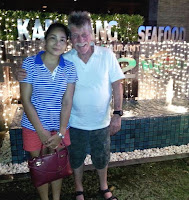 Kannika has proved herself to be an excellent House Manager and Hostess. She and Dave got on famously.

But now, sadly, Dave has gone and will already be back in UK ready to defend his honour in the forthcoming Flounder Championships...

Dave told us that this was the best holiday he had ever experienced in his life which makes doing this venture satisfyingly worthwhile. I want guests to have a nice time here and when they do not, which is rare but can be the case, then inevitably there is a great sense of disappointment on my part. So it is fantastic that Dave had such a great time and was such excellent and jolly company.
Posted by OFFSHORE REBEL THAILAND at 6:57 PM