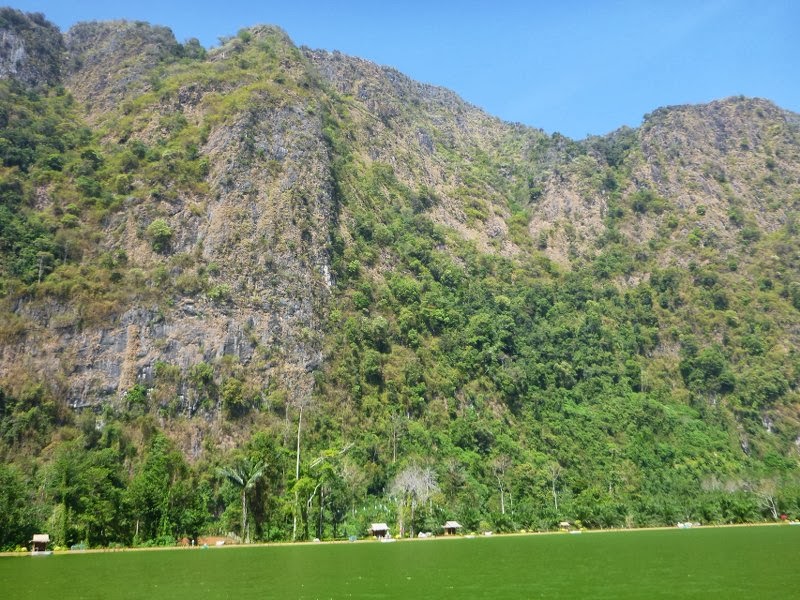 It takes two hours to drive from my house in southern Phuket to the Phang Nga region north east of Phuket Island. We leave just before 6am and actually enjoy a drive when the roads are quiet. The scenery in Phuket is pleasant to look at but usually it's an impossibility for the driver to see anything because 150% concentration is required to deal with Phuket's insane roads. The local newspaper, The Phuket Gazette, always carries features regarding the terrible standard of driving here.....we are told often to expect the unexpected...such as a motor bike coming straight at you on the wrong side of the road and carrying a whole family including babies and a dog on it. Imagine the awful consequences if they collided with you. In Thailand, and I suspect the same may be true of Asia as a whole, any accident is the foreigners' fault....after all, it would not have occurred  if you were not there in the first place. Irrefutable logic, eh? 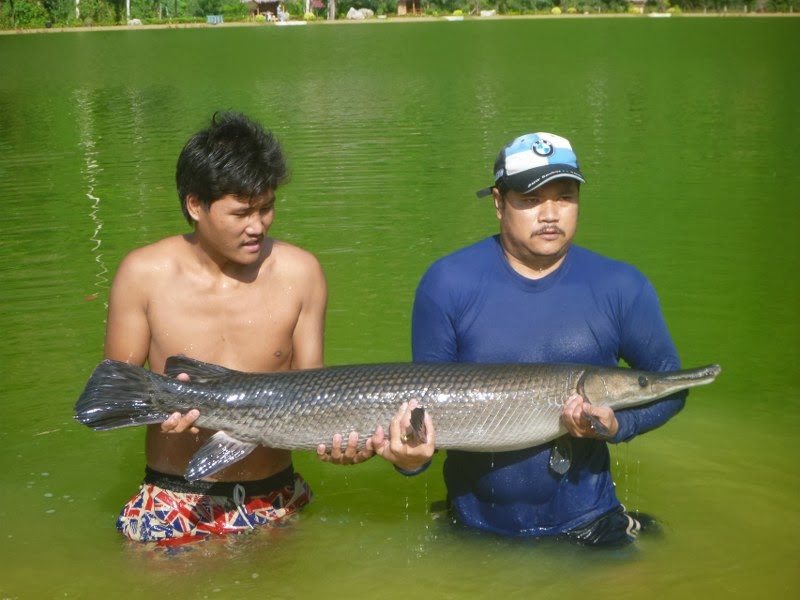 Once clear of Phuket, the roads become much quieter and the scery becomes increasingly attractive with jungle, lakes and mountains to see. When we arrived at Mike Bailey's Exotic Fishing Thailand John and Rod just stood there gazing at the imposing backdrop of the massive limestone wall running right behind the lake. The previous Blog referred to Colin Mackay's superb new book A History of Phuket and the Surrounding Region in which he explains that this majestic scenery is a result of dropping sea levels exposing the world's biggest coral reef which in turn changes to limestone through exposure and weathering.

Once our dropped jaws were back in place, we were able to watch a delivery of the latest fish to arrive from Bangkok. Above you see one of a number of Alligator Gars about to be introduced to the lake... 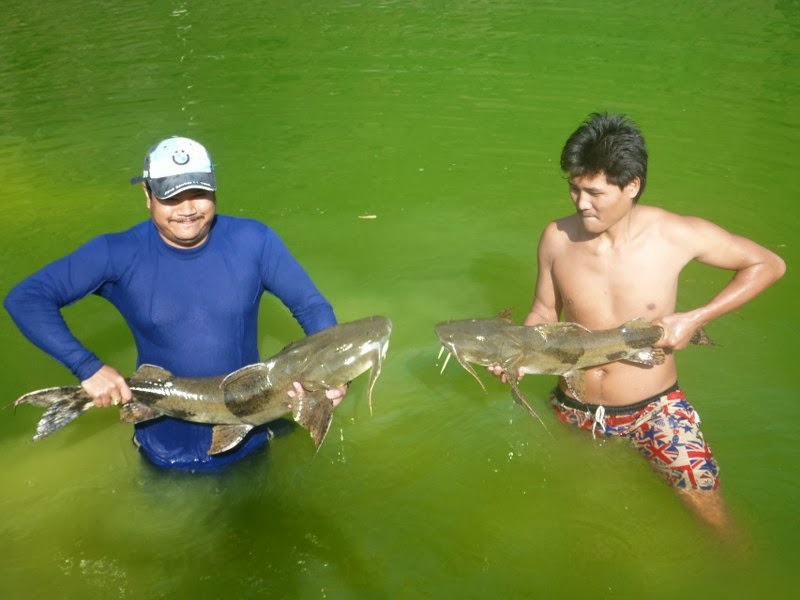 ...and here we have some particularly toothy catfish that Mike will send me the name of once he has read this (hint) and then I can edit and add! 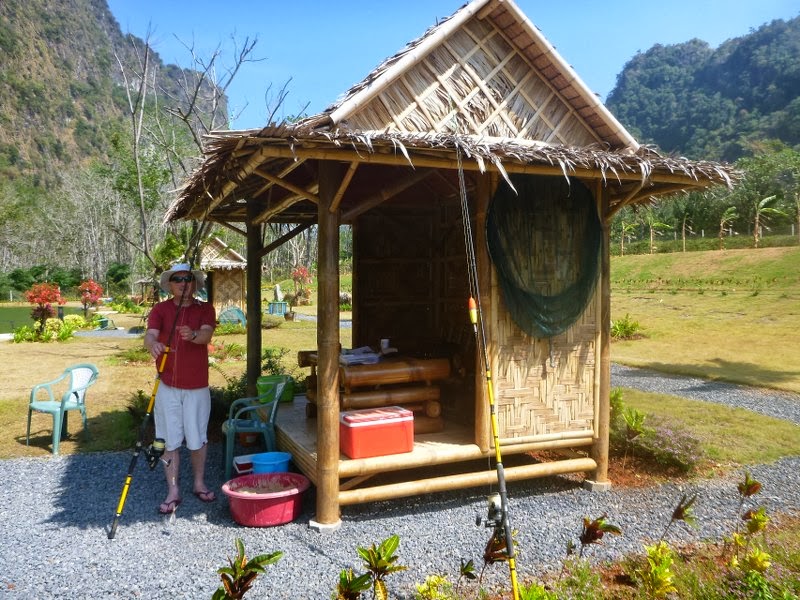 Here's Rod (from Southampton) sttling into his home for the day. Note the gurt net on the side of the Sala. 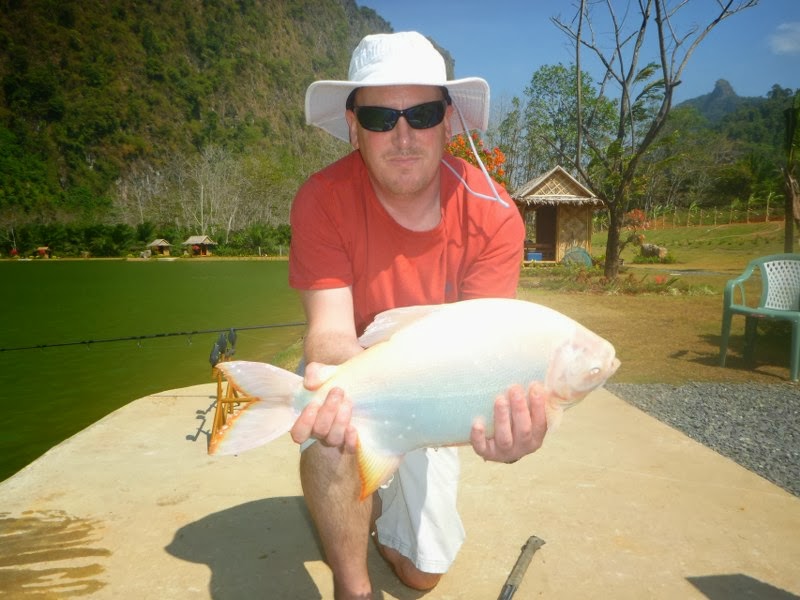 The whole idea of Exotic Fishing Thailand is that it provides the wonderful opportunity to catch a whole range of species. There are currently 58 different species in the lake...and here is one of them which is the very hard fighting albino pacu. 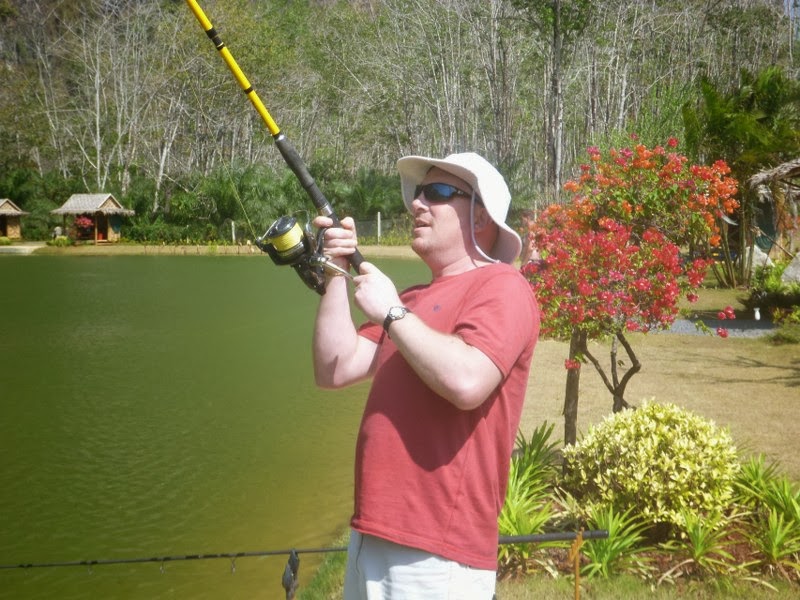 The gardens are coming along nicely now. The Thai staff are constantly in attendance watering and pruning. There's no doubt that when I return next year, the gardens will be well established. 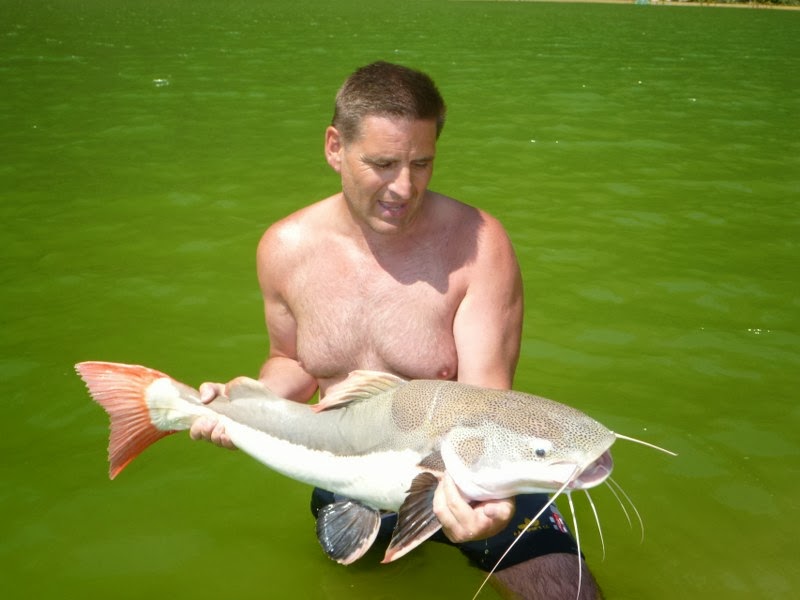 The Red Tail catfish is reputed to be the hardest fighting freshwater fish in the world....and it deserves its reputation. These are great fun to play. Here's John Ballamy (Southampton) presenting one of the three he caught. 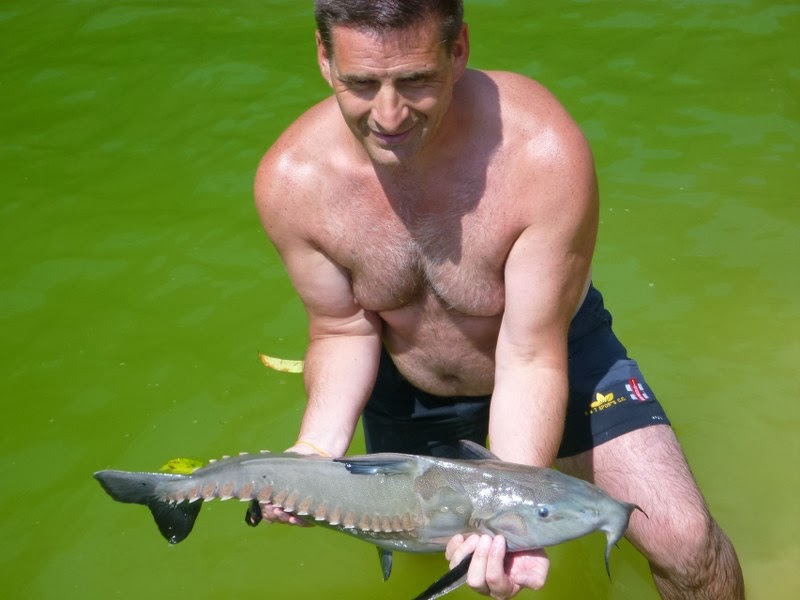 This is a Ripsaw Catfish from the Amazon. You can see the protection running down its flanks giving the fish its name.....you don't want to let this critter slip through your hands!! 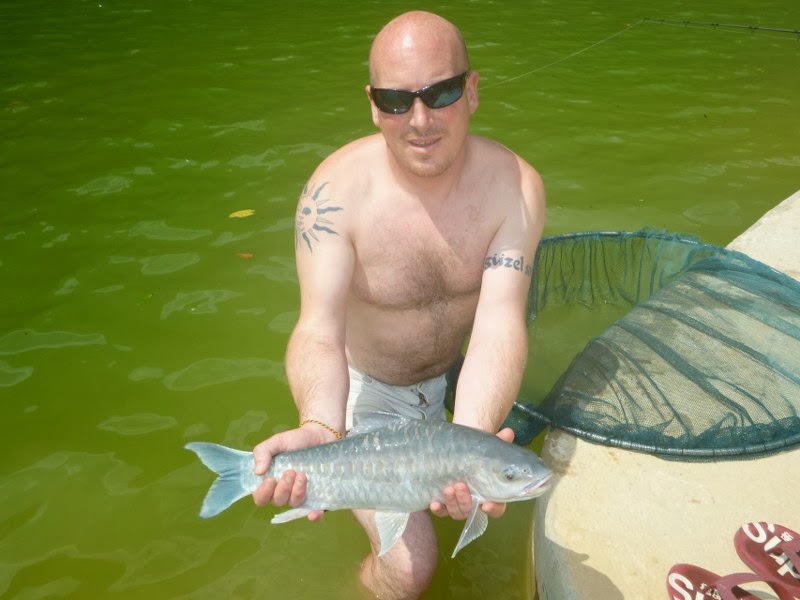 There are less than ten Thai Mahseer (you anglers will know of the Indian Mahseer) in this massive lake so this was a rare species for Rod to catch. The fish has an attractive light blue colouring to it. 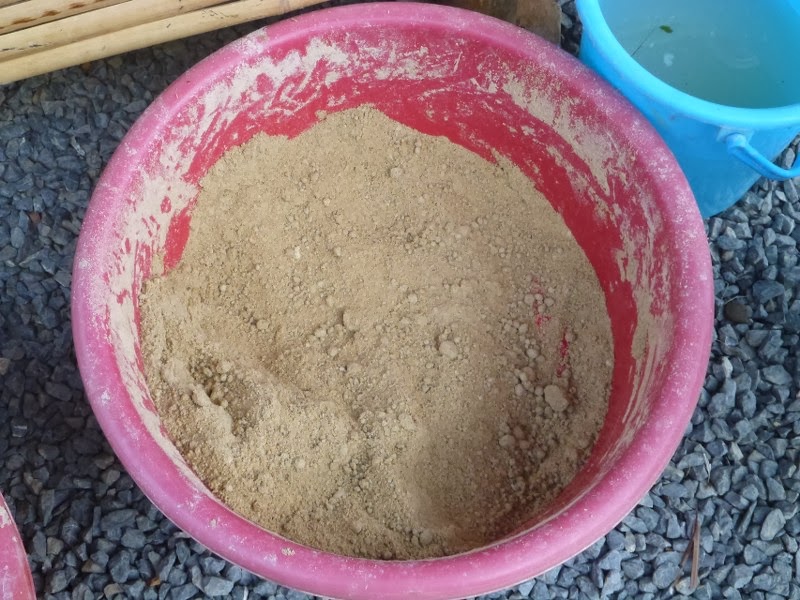 Method feeders are used and there is a definite skill in moulding the groundbait ball into the correct shape and with the right consistency. The density of the ball is crucial so that it sinks and then slowmy breaks down giving a 15 minute feed period. The hook below the ball is not baited but rises off the bottom through the use of 5 mini poly balls so that it may be inhaled along with the groundbait. The ball also acts as the weight for casting.

Now I know you freshwater gentlemen know all about this stuff....so forgive me for explaining it in such a naive fashion but I have in mind that most of my angling customers who are reading this are sea anglers. It was never my intention to come to Phuket and get involved in frehwater angling....but the general inshore seafishing around Phuket is so poor due to massive over fishing and over exploitation of the fish stocks that our sea fishing has become markedly less productive during the ten years I have been here. Thus we have turned our attentions more to the freshwater scene and it is extremely enjoyable.

As someone who has set up a very tiny business project here in Phuket and has experienced plenty of problems in doing so,  I can only express my genuine admiration for the 'foreigners' I have met here who have constructed significant projects. These fisheries we are enjoying are the result of the vision and determination of remarkable men. I for one would never be able to carry off such massive projects. 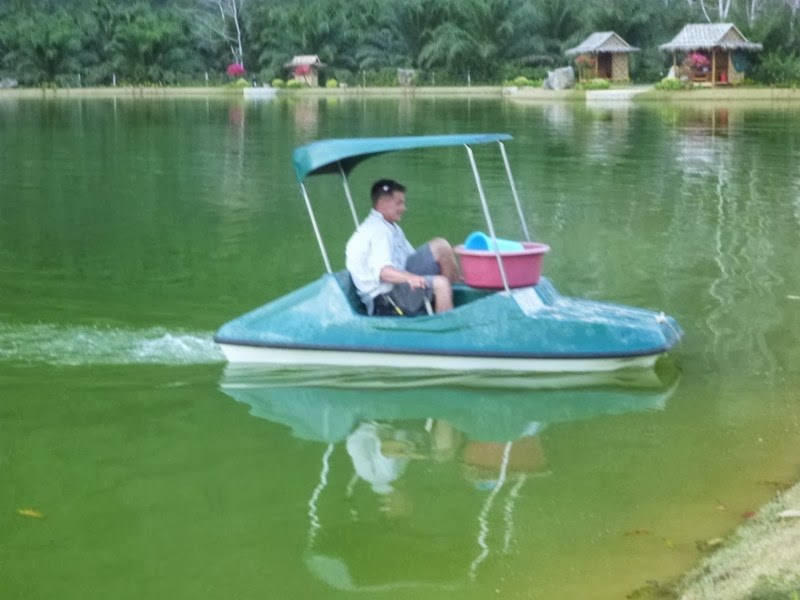 I recall as a kid fishing in Weymouth Harbour. When I was about 14, I hit on the idea of using my model boat, complete with battery driven inboard engine, to deliver ground bait to various parts of the harbour in my search for mullet. Once I had yanked the groundbait off the boat I could guide the boat back via the string I had attached to it. Mike Bailey has of course gone consideraby 'one better' by bringing in Ross from Canada. Apart from being an extremely hard working and knowledgeable guide, Ross is a master manouvre of the craft shown above which he uses to lay down areas of groundbait for the anglers to cast into. 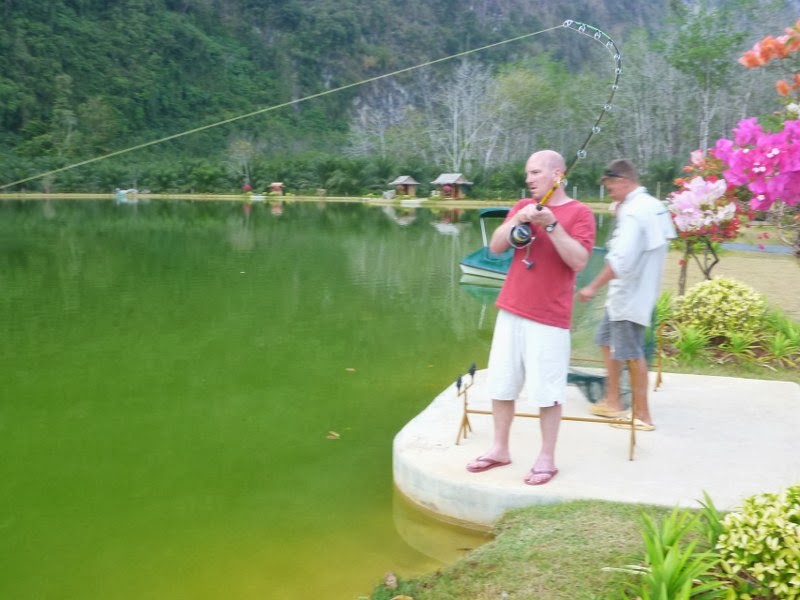 The results were immediate with Rod hitting into a fish within seconds of the groundbait being laid. 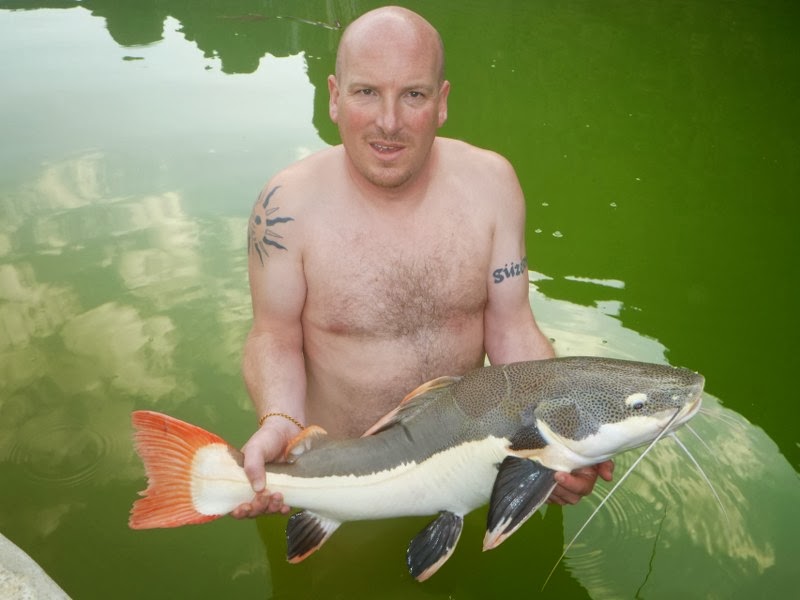 Results of the above was a fine redtail catfish...but as dusk settled the best was to come with a flurry of bites and, with just minutes to go before fishing finishing for the day, John and Rod had bites simultaneously resulting in these two fabulous Siamese carp shown below. 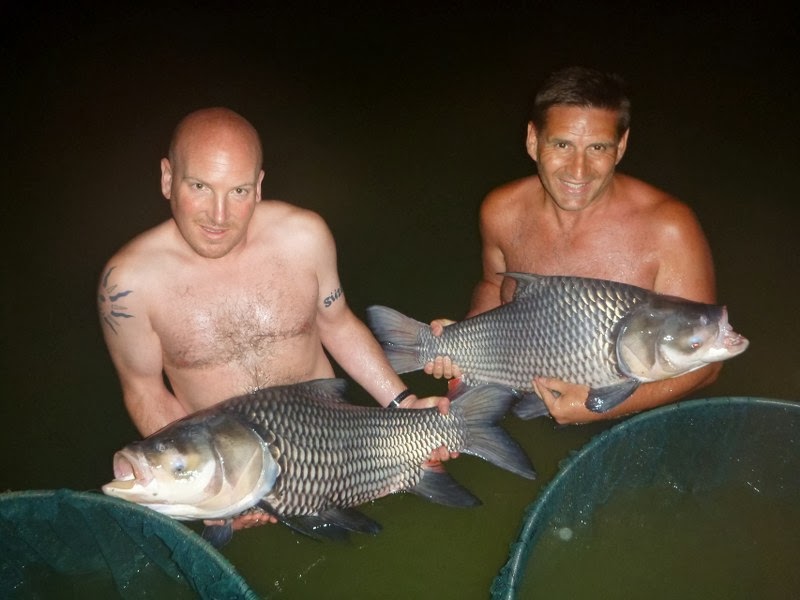 The lads finished the day having caught Ripsaw Catfish, Red Tail Catfish, Amazonian Paku, Yellow Cheek Carp from China, Thai Mahseer, Pariaba Catfish, Jababarbs, Talapia (from Mozambique) and Siamese Carp....needless to say we are having a terrific time here. The fishing is wonderful and life in Phuket is great fun (apart from the traffic!!)

On the one hand I am very happy to announce that next year's Dec 2014 to March 2015 is already full and over subscribed....but then I am genuinely disappointed I can offer this experience to more of you who have expressed an interest in coming. If I was an enterprising businessman such as the men I refer to above then I would buy another house or a bigger one so that more of you could come...but I just do not want to go through it all again.

'Small is Beautiful' they say....well, this little project of mine is staying small. If you would like to come, then you need to think of provisionally booking for the Dec 2015 through to March 2016 period. Although I am not going to be here in November, Jai will be so we could offer November. I can give you all the info required and you could use the house as the base for your own adventure....which is what I had in mind from the start anyway.

Rod and John leave within the next couple of hours with Richard, Steve and Keith joining us. Their plane comes in two hours after John and Rod leave for the rains of UK. We are fishing the Phuket lake on Tuesday and then off to Krabi to enjoy Stuart Gillhams fishery in Ao Nang for 4 days.

Happy Days to All!
Posted by OFFSHORE REBEL THAILAND at 11:42 PM