We're always up for a challenge and for trying new fishing techniques to try and catch the elusive pelagic fish of Phuket.

We'd been guided towards a young go-ahead Thai skipper named Jay, just like my crewman back in UK! (No, not Jai...when Jai is here in Phuket looking after you all, Jay is in Weymouth looking after Rebel...clear enough?? OK, I shall continue).

Anyhow, Jay of Phuket clearly comes from a wealthy Jai/Chinese background. Owner of the best tackle shop in Phuket Town, Jay turned up with his new 4x4 towing 'Haloo ' which is a year old fast aluminium craft powered by a Mariner 150 HP outboard giving a cruising speed of 25 knots. 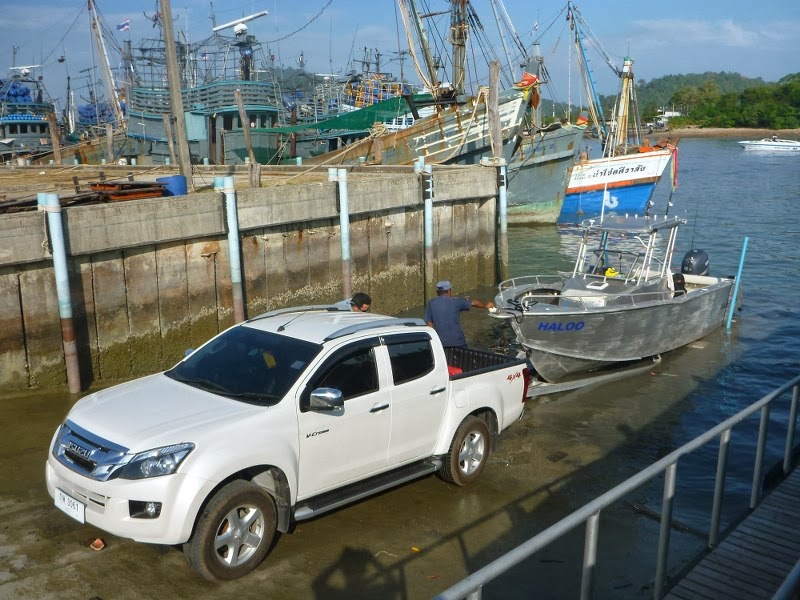 Jay's tackle was top of the range Shimano jigging gear with his rod and reel costing £750....miles better than the crap I had bought along for myself and 3 friends. I had rigged up our Grauvell fixed spool reels with 50lb braid as advised with 60lb leader and invested in a varied selection of jigs in the £4 to £10 range. Our rods were spinning rods and not much good for this type of fishing. But we tried!!

Take a look at this 2.5 minute Instructional video on jigging...you will see how much effort is required. Try doing that all day in 30 degrees out at sea....it's not easy. Our skipper Jay never stopped...he was superb. Ah, to be young again....it's a load of bollox getting increasingly ancient. 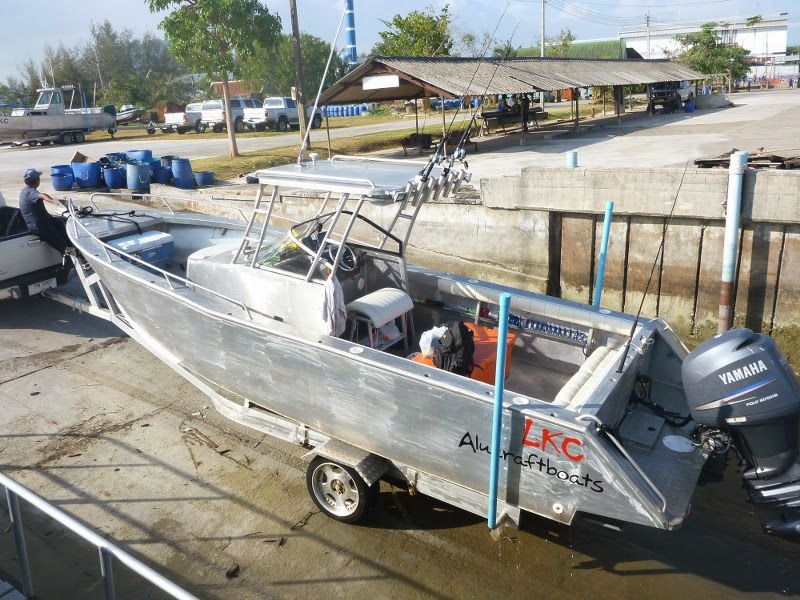 Nice bit of kit, eh?? We were limited to a maximum of 4 on the boat plus Jay. The boat cost £320 for the day. If you want to hire tackle then it is £40 a day each (yep, just a bit more than the £5 we charge back home towards maintenance) and then lures are charged on top. We all lost a couple each so say an additional £60 to £80 in lures. You get an idea of prices!! Anyhow, what the hell...we are on holiday!! 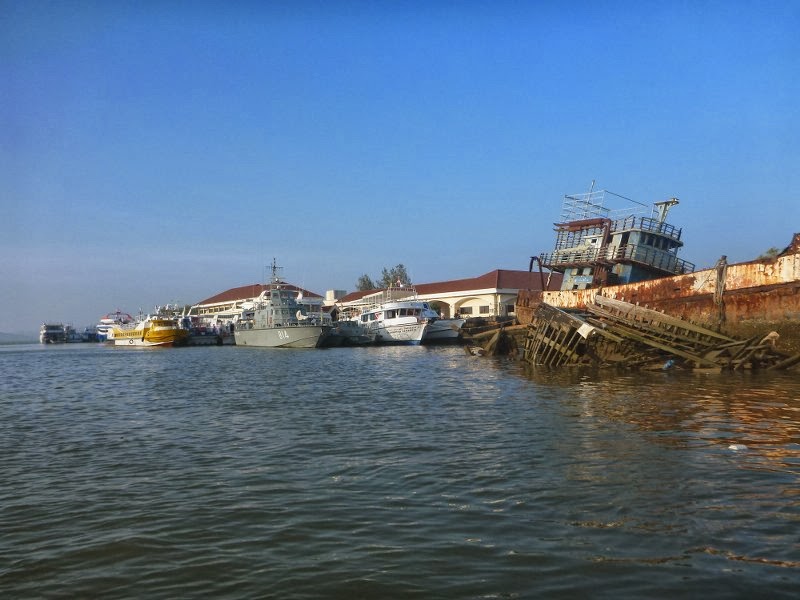 Our day started early....we were to meet Jay at 0700 and once the boat was launched etc we were on our way past the sinking Thai fishing boats (yep, commercial fishing here has just about destroyed itself...the usual story...take everything and blame everybody else for the lack of fish stocks) and headed out past the many islands towards Racha Yai which was a good 20 miles out to sea.

Jay worked extremely hard. He is young and keen and he kept the boat drifting the marks with great efficiency...and he fished all day for us.

Our intended quarry was GT (Giant Trevelly) and we did have some success.... 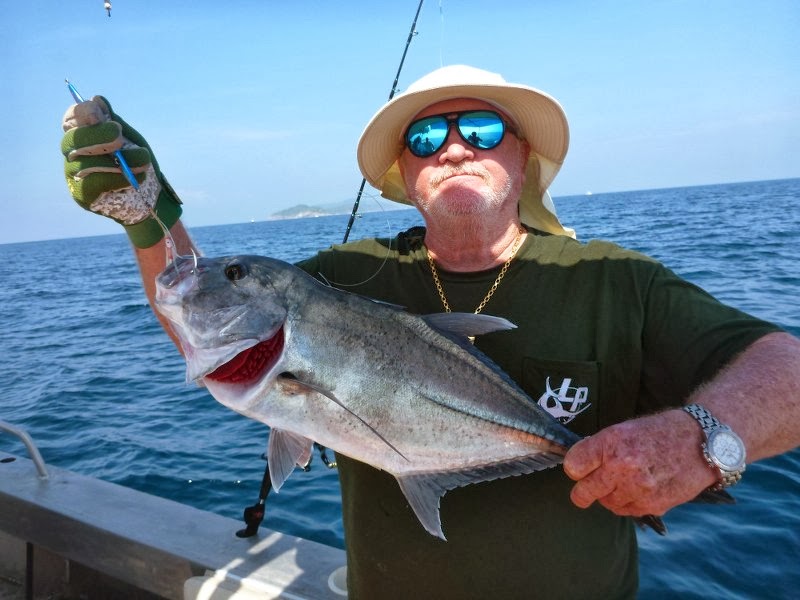 Here is Mr Horst Schneider, the Chairman of EFSA. This year, in Weymouth, we are hosting the EFSA World Championships so those of you involved or who would just like to wander around when the 20 odd boats involved return to port each day (we return to the pontoons just outside the Weymouth Hrabourmaster's Office) will see Mr Horst Schneider strutting about and shouting in instructions to we minions....Horst has a fabulous property here in Phuket (and also does renting of holiday homes) and often joins us on our various fishing trips. We kept on the move searching out many different marks and ended up a good 30 miles out south of Racha Noi.....and here's our Gary (Chard) rewarded for his and Jay's efforts with a nice GT...... ...and our outstanding young Thai skipper, Jay. If any of you reading are likely to try jigging or popping then I recommend Jay as being by miles the best skipper I have been out with in Phuket. He is dead keen and an extremely excellent angler as well as being polite and charming...just like me really. Jay's number is 0857899433 (This is, of course, a Thai number for anyone here who'd like to book him...he's very busy, be warned!!) 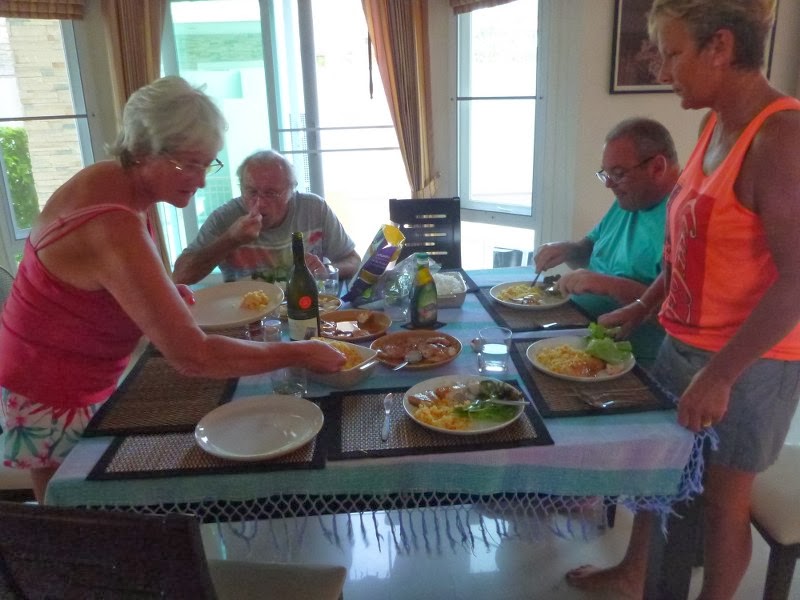 GT's make fabulous eating. We presented our catch to The Jai who immediately attacked it with her filleting knife in the way only The Jai can. She then cooked up the GT's in 3 different Thai styles with various sauces...Here we see (L to R), Janey our Janey; Stevie my Darling; Gary and Mandy Chard. Horst was no doubt enjoying his catch as was our other angling friend Jeremy who joined us on the boat but who has bought a property in nearby Kata....see, we're all at it...we like the sunshine and the fishing of these 4 months in Phuket.