I've been trying to obtain a copy of the superb new book 'A History of Phuket' written by Colin Mackay and yesterday The Jai found a copy for me. The first section deals with the Geology of Phuket and Phang Nga. Phang Nga is where Mike Bailey's Exotic Fishing Thailand is based. Quoting directly from Colin Mackay we learn that 'Phang Nga Bay owes its majestic scenery to a vast and ancient coral reef that grew up some 200 million years ago when the sea level was over 300 metres higher than it is today'. This 'gargantuan reef was the biggest the world has ever known and stretches through Sumatra, the Malay Peninsula, Thailand, Laos, Vietnam and right up into China'. 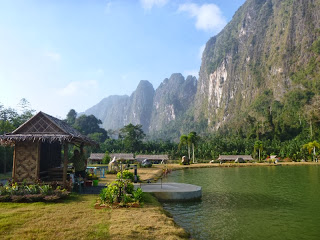 'As the world's sea levels fell, this huge coral reef was left projecting high and dry in the air. When coral dies it forms likestone which is easily eroded by rainwater, so this great reef is now eroding and large chunks remain starkly upright, jutting out of the surrounding sea and green forests of Phang Gna and Krabi'.

Colin Mackay's vivid explanation helps us to comprehend what is truly stunning scenery. Exotic Fishing Thailand couldn't have a more suitably exotic setting with a massive ex- coral limestone wall as its backdrop. 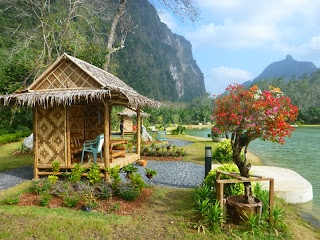 My photographs and lack of photographic ability cannot possibly do this scenery justice. It is a part of the world you must visit and see for yourself. Several years ago The Jai and I enjoyed 3 days aboard a Vietnamese Junk in Halong Bay in North East Vietnam near the Chinese border. This is another particularly famous place for this limestone scenery and is one of the planet's most photographed locations...it is all just amazingly stunning. (If you came for a holiday with us here in Phuket, then it is a short plane ride to Hanoi and on to Halong Bay...but that's another adventure). 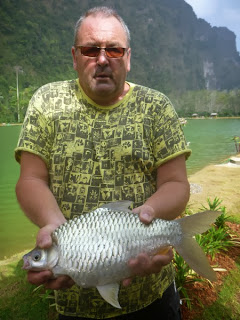 We, of course, came for the fishing. The lake has attracted a good deal of attention and is very booked up.  I was lucky to get Gary Chard and Steve Thorne booked in which was the main aim but not myself. Hopefully, I will have a chance in the coming months. Within seconds of the baits being cast in, the rods were twitching and thumping with bites and runs keeping out two anglers leaping out of their seats to grab their rods. Here's Gary with his first fish which is a Jabbabar. The lads were to catch a number of these. 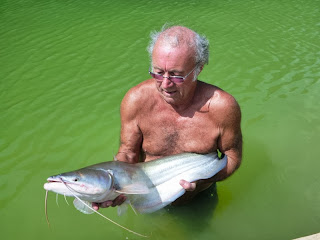 And here's Steve Thorne with one of the various catfish in the lake which I am told was a Wallagoo Catfish. 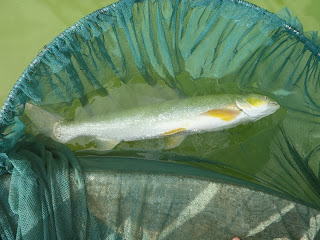 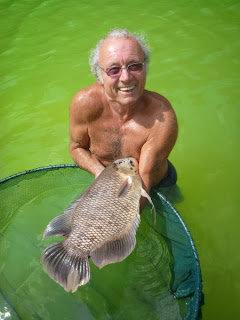 And so our day went on with each angler catching 6 different species each including such exotic sounding species as Albino Pacu and African Walking Catfish. Steve did try to hold the Walking Catfish fish for a photo but it was one slippery customer and had slipped out of his hands before I could focus the camera!! 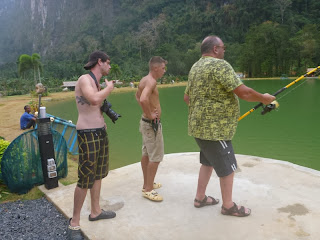 But now for the highlights!!! Late afternoon and Gary was bent into something special. Ross and EFT's very own photographer are tall lads so that gives a good impression just how big Gary is....and even he was having to put a small degree of pressure on his fish in order to try and coax it towards him. 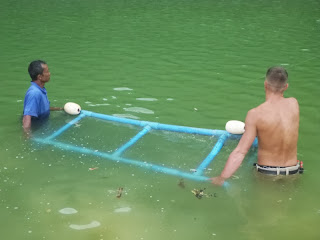 This was not a fish to be messed about with....no large landing net for this beast. 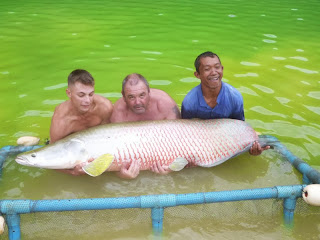 And so, we proudly announce that Mr Gary Chard from sunny (ha ha) Weymouth is now a member of the illustrious 100kg club with this fabulous Arapaima being estimated at 120kg. Gary's monster was landed on a Shimano Baitruner reel and a Shimano Uptider....a wonderful 'fish of a lifetime'. 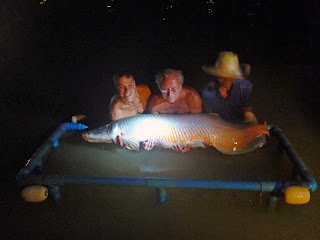 With darkness falling (it starts getting dark here at 6.30 pm) our day was concluded perfectly with Steve Thorne having the opportunity to fight and land another Arapaima. Our Canadian guide, Ross, estimated this one at around 60kg.

So, our first opportunity to benefit from the enormous amount of work Mike Bailey and his team have put into creating Exotic Fishing Thailand was a resounding success and is a day in their angling careers that neither Gary or Steve will ever forget. Thank you to all at Exotic Fishing Thailand  for looking after us so well and providing us with a day to truly remember forever!

Take a look at the links below for more information on Exotic Fishing Thailand.

And with thanks to Colin Mackay for his explanation of the scenery. For anyone living in Phuket or interested in this part of the world, then Colin's 'A History of  Phuket' is throughy recommended.
Full of detailed information that must have taken years to research, it is one of those rare 'history' books that is hard to put down. Published by White Lotus Co Ltd in Bangkok, the phone number for sales enquiries is 081 558 3234. And for those of you who know Phuket well, my copy came from Asia Books near Jung Ceylon shopping centre in Patong and I am informed that Lady Pie Co Ltd at
32 Srisoonthorn Rd, Cherng Talay, Phuket 83110 Thailand Tel: (66) 76 271049 has copies.
Posted by OFFSHORE REBEL THAILAND at 10:45 PM