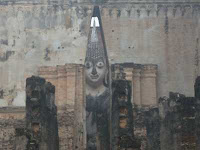 Sukhothai ruins....one of Thailand's mst impressive World Heritage Sites. 21 historical sites are contained within the Old City walls and a further 70 sites outside all within a km radius. It's such a big area that you need to hire at least a bike to get round some of it...or a bike...or, in our case, a air conditioned car with a driver and a case of chilled beer.

The Sukhothai Kingsom flourished from mid 13th to late 14th Century and is the period likened to our 'Rennaisance' period when art and culture reached thier peak and still exert a massive influence on today's Thai art and religion.

During its time as Thailand's 'Capital', Sukhothai amazed travelling European merchants with its level of sophistication and population which was well in excess of 14th Century London, Lisbon and Paris combined. I include Lisbon because this was the time when the Portuguese were heavily involved in this part of the world. Much of old Phuket Town contains plenty of Portuguese architecture. 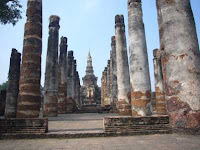 Anyhow, all that aside....Sukhothai is north of Bangkok and south of ChiangMai. If you have the energy to do a bit of site seeing while you are here in sunny Thailand...then this is another 'must' to visit (well, that's if you like temples of course). 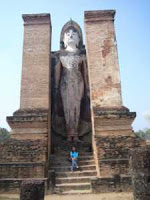 Here is a picture with one of the many remaining Sukhothai Buddha images towering over our Jai sitting at its base. It's a very popular place for Thais to visit but as the area the 'park' covers is so vast, you can stroll around as if on your own. Excellent!! As ever, it's best to go as early as possible before the sun begins its daily assault on the fragile European body....the parl open at 0600...and that's the time to get there for 5 hours max...then scarper and maybe return in the evening.

Posted by OFFSHORE REBEL THAILAND at 12:19 AM