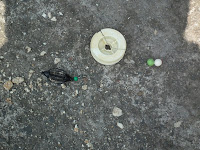 Building on the oustanding success of our fishing trips to Phuket Park and the expertise offered by the extermely keen and dedicated anglers who have visited us this season, Steve Gilbank has refined the rigs even more and now it is literally seconds before a fish is on. 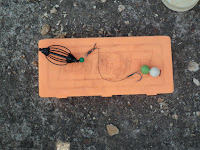 The rig! The feeder cages come from the UK rather than Mr Moos Phuket Emporium. The mainline runs straight through it to present a running rig rather than the ones we have been using which are tied direct to the mainline and then the trace tied to the other end. here the mainline, just as in a running leger rig, goes to a bead and then ties to a swivel. The trace is 70lb braid tied to a size 1 hook but thge clever bit is with the green and white beads. The green sinking bead is green lipped mussel and hemp flavour and the white pop-up is infused fish aroma...and stinks! It's a killer rig...in fact so effective the lads had to change rigs to give a bit of a respite in the hectic fish action! 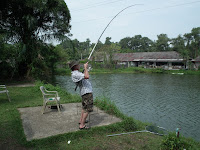 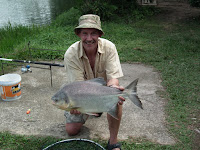 Loads of Pacu this year....the craziest freshwater fish ever. 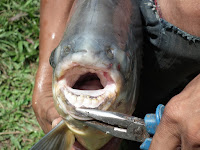 Just look at the teeth on this crazy fish. But using the braid dramatically reduced the bite-offs. a pair of pliers is essential to avoid finger lacerations. 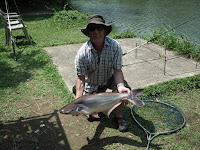 Chris Vince with a catfish 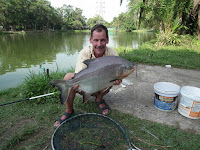 Steve Gilbank with another Pacu..... 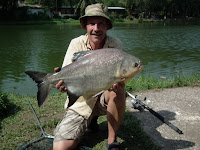 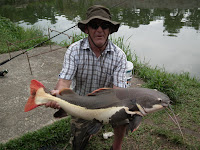 A change of rig with the trace lengthened from 6'' of 70lb to to 8''  of 100lb and the hook size increased to a 1/0 with no hair rig and chicken bait.....result..three Amazon red tail catfish. Beautiful fish and known for their power. Looks the same...but a different fish for Chris. 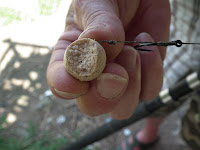 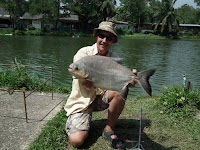 Another example of presenting a different bait...this time a pellet on the hair rig.

And another Pacu to finish up with.The lads kept detailed fish by fish catch accounts...they show a steady catch rate right throughout the day with Hobens Carp, Pacu, Redtail Catfish and Mekong Catfish featuring throughout the day. Fantastic fun.
Posted by OFFSHORE REBEL THAILAND at 4:43 AM