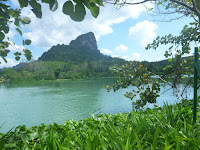 Thank Goodness for digital cameras where we can all snap away all day and discard mostly everything in the evening leaving only those finest shots. Gillhams Fishery in Ao Nang in the Thai province of Krabi is one of those places where it's impossible to put the camera down. The drive from Phuket, through Phang Gna and then into Ao Nang features a dazzling array of limestone Karst formations towering over the road and away into the distances. The Big Sur, running from California to Los Angeles, is often referred to as the most scenic road in the world but the Phang Gna to Ao Nang route must be a serious contender to that title. 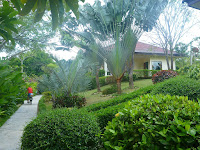 The first thing to impress anyone when arriving at Gillhams is the immaculately cared for gardens and grounds. An army of Thai gardeners keeps the venue pristine and spotless...it's no exaggeration to say there isn't a leaf out of place! Over the years that I have been fortunate enough to visit, the plantlife has naturally developed to rival gardens that are set out to be tourist attractions in themselves. It is impossible to lavish too much praise on the setting, the scenery and the care that is so much a part of an angler's trip to this genuine piece
of paradise. 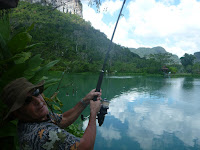 This years the lads, Chris Vince and  Steve Gilbank from Devizes and Andover along with Dorset lads Richard Spracklen and Keith Downton travelled by sea from Phuket to Ao Nang. I drove the route for a change along with team mascot Kannika as it was our intention to fit a day's diving in from the Phi Phi Islands and we like to take our own gear.


You know how it is with us skippers...we just know when it's fishy or not! The moment I arrived at Gillhams, Chris Vince was shouting that he was into a fish. We watched him play what turned out to be, after a 30 minute battle,  a 40kg Siamese Carp!! Chris just could not believe it....''what a fish, what a fish, what a fish!'' 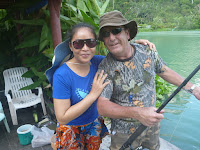 Chris has been having the holiday of a lifetime here. Having never donned Scuba gear before to now having accompished two full one hour dives which left him so excited and lost for words that it was just great to watch him having such a great experience to now latching into a monster carp....not that much under 100lb! Here he is...all of a tremble with Kannika trying to calm him down before going into the water for his photos! 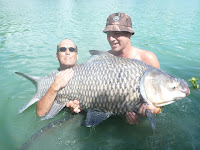 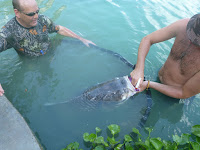 Checking the mouth before iodine is applied...the fish is then kept in the net to allow it time to gently recover before encouraging it to swim away when ready. This fish care, evident at Gillhams and Exotic Fishing Thailand certainly sets the standard for how things should be done. 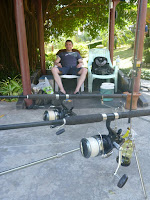 Since my last visit two years ago, the umbrellas which used to offer the anglers their shade at their swims have been replaced with very smart looking individual salas. A couple of chairs in each, a fan, a light and a phone/Ipad Charger (such attention to detail!) makes for a very pleasant place to admire the lakeside scenery whilst waiting for the bites. Here's Keith Downton in a semi- relaxed state with his eagle eyes and lighting reflexes ready to explode into life the moment the bait alarm starts to sing. 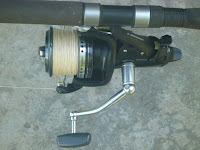 The rods have all been treated to new Shimano Baitrunners which are  all loaded to the brim with quality 80lb braid. 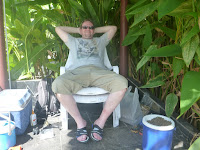 Ah....Mr Richard Spracklen at his ease.....he's a chap who knows how to make himself at home. 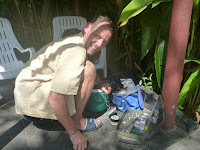 And here's Mr Steve Gilbank who is not one to sit around much...constantly fiddling with his tackle to give himself the best chance of catching something. 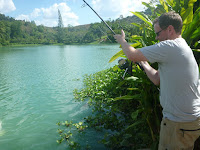 And...straight after Chris's carp, Richard was into a very lively and hard fighting fish....which turned out to be... 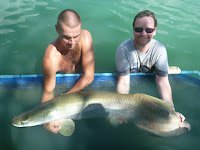 ...a young Arapaima. We were told that this fish was the result of the lake's very own breeding pair so this is a wonderful development for the fishery. Our guide explained that the photos had to be done pretty quickly as this youngster was extremely lively and very good at jumping out of the cage. 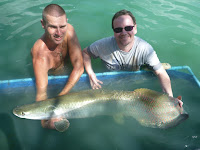 A very happy Richard.....the fish was estimated at about 30kg...a mere nipper but Richard's first ever. 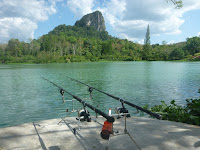 How can you fail to be inspired by this view?? 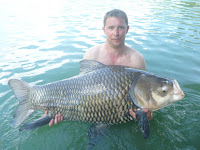 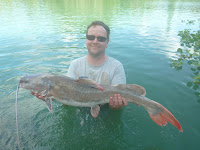 Richard Spracklen with an Asian Redtail Catfish...noted for its very long white feelers. 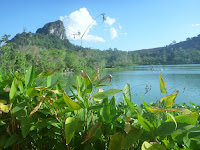 The view from the restaurant...beautiful. 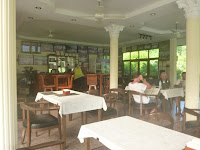 The restaurant.....which serves a fantastic English breakfast which all hard working anglers require before a hard day at the lake...and a great selection of dishes to choose from at night. Fishing stops at 2000 but there is often a fish on at that sort of time. After returning to the Resort Bungalows for a shower etc, it's easily 2100 by the time customers reach the restaurant and then there's a great atmosphere with everyone swopping stories and sharing a laugh over dinner. 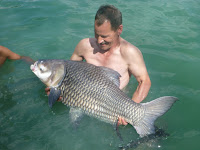 Steve Gilbank, Andover, with one of his 40kg carp...this sort of fishing will never be forgotten. 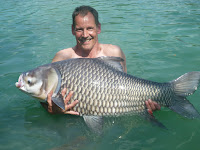 And another face-on shot of what really is a stunning looking fish with its big silver black scales reflecting the sun. The fish are still semi-supported by the water and the gillies allow only a couple of photo shots before the fish is lowered back into the cage to recover. This is to minimise the stress for the fish. 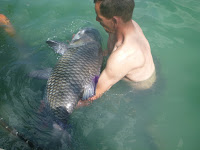 The swims all have an iodine spray available and the fish is carefully checked out with any apparant nick given a good dosage. You can just see the purple on the dorsal fin by Steve's left elbow, in this photo. 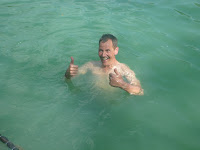 And here's a picture that says it all. This is what anglers come for...Deep and Lasting Joy! Funny lot, ain't we?! 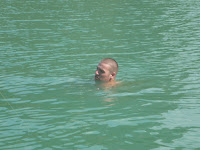 Richard Spracklen hooked into one of the lake's Giant Freshwater Stingrays. He fought it for over 4 hours and ended up completely knackered. The Gillies worked non-stop to try and ease the ray out of the bottom everytime it got stuck....they too were knackered after this marathon battle. 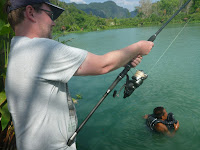 Glock (I can't spell his name) has been working at Gillhams for many years now. He is famous in his own right. Apart from being extremely funny, he is always at hand...or in the water as the case may be....and is totally protective of the fish. He must know every fish by name now and you can see genuine concern on his Thai face if a fish comes to the net and has any blemish on it. Glock is the first there with the Iodine spray. On this occasion he was in the water for hours trying to assist Richard to bring the stingray to the net. It was a valiant team effort....but in the end the ray won. 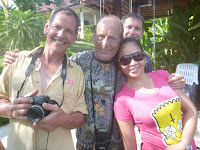 The team gathered to whisper words of encouragement into Richard's ear. Steve, Chris, Kaniika and Keith. 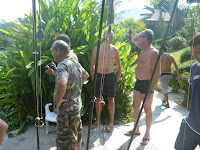 An admiring crowd gathered to symphathise with Richard whose rod and back were bent double in the 32 degree C heat for four hours...!!! Who said freshwater angling was easy?? 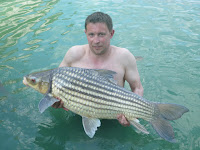 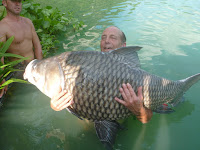 And as for Mr Chris Vince. Well, he has had a holiday that he cannot believe. So many mind blowingly new experiences....ha ha...look at him, bless him. At just a tad under 100lb, Chris can't believe what's happening to him with yet another monster Siamese Carp!

This is what coming to Thailand is all about.....you will NEVER forget this place.

And the final fish of the last evening's fishing...Keith Downton with another fabulous carp estimated at 45Kg.

And now it is Friday 19th. We have returned to Chalong by boat and car for this the final full day in Thailand for Steve and Chris. This will be a day chilling by the pool, having a few beers and relaxing....saving up the energy for one final onslaught on the Phuket night scene tonight......!! Sadly they must return to the UK tomorrow but Richard and Keith are staying for a couple more weeks and we have various guests arriving over those next couple of days to replenish our changing team of intrepid adventurers.
Posted by OFFSHORE REBEL THAILAND at 6:29 PM