A four hour journey in choppy conditions took us to our secret location out in the Andaman Sea to the north west of Phuket. Dropping down into 27 metres we could see the shape of the first elephant looming into view....part of the shipment of artefacts to Sri Lanka from Thailand, then called Siam, in 1804 to commemorate the inspirational part Sri Lanka played in the great Indian Epic, The Ramayana, which had swept across Asian 2,000 years ago. In 1804 the Kings of Siam in the newly estabished Chakri Dynasty, King Rama 1 and then his son Rama 11, had rewritten the Ramayan and renamed it the Ramagian. The story remained similar to the original but a 'Thai Slant' was put onto the story with the characters taking on different names....for example, the hero of the story was called...Rama....well, there's a coincidence! The current King of Thailand, crowned in 1950 and now the longest serving Monarch in world history, is Rama 9.
Now with all this religious/cultural/historical significance....I leave you to just imagine what it must have been like for Jai to see these things on our dive. Jai doesn't normally breath much underwater...but she did on this occasion!!!!! It was pretty tricky to get these photo's without them being blanked out by a cascade of bubbles escaping from The Jai! 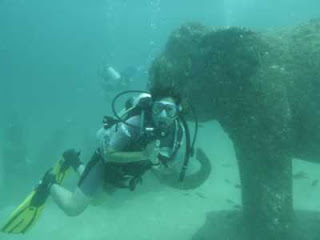 See...even with a mask on she looks SOOOO happy!! 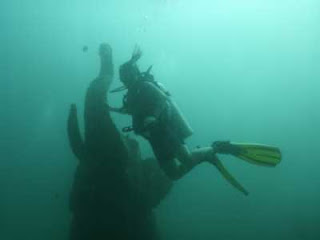 Elephant and Jai Head to Head 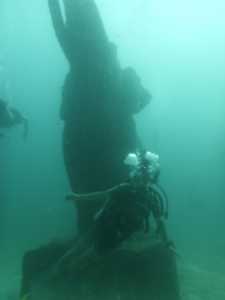 Look at the air blowing away...ha ha.....we had to send another bottle down for her and change underwater to keep her going!! 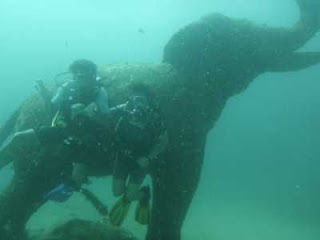 And here we are.....whoever would have thought an elephant would be such a source of photographic inspiration?? 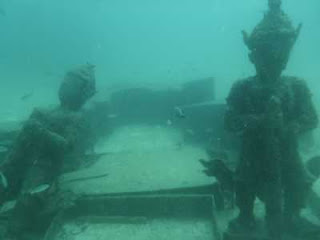 Amazing that two of the elephants and one of the Temple Guardian Yaks are in an upright position. There's various bits and pieces and scattered around. I promised not to give too much away as the main problem would be looters...and the area hasn't been completely mapped out and protected yet. I don't know if this will become a dive site open to everyone...we'll have to see. 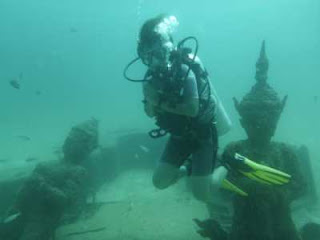 And Jai in a proper position of prayer.....just like the flying angels in the brilliant Thai culture show (Siam Nuramit) we attended last night....but that's another story.

Now you rascals may think that we haven't been doing much over here lately as my Blog contributions have been pathetically low. It's just the opposite...we have been SO busy....on the go from early in the morning to very late at night. And the Blog isn't the most user friendly bit of software to use!!! Tomorrow two of our guests leave us....and so I will have a couple of days to do a few more bits and pieces.

Posted by OFFSHORE REBEL THAILAND at 12:55 AM