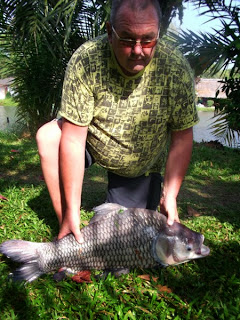 Yesterday, 28th Dec, four of us drove north in the formidable 4 x 4 Mr Gary Chard had rented in order to concentrate on the carp in Phuket Fishing Park.

Mark Butland chose the northern side of the lake where the carp had been coming from over the past couple of weeks whilst Mr Steve Thorne, Mr Gary Chard and meself (as Gillie and GOFOR) fished the southern bank. Of course Gary was into the first Siamese Carp on his very first cast. These carp are extremely powerful and very heavy for their actual size and provide a very lively and prolonged fight to the net. Excellent sport. 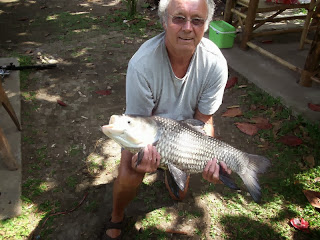 But it was to be Mr Steve Thorne's day. Here he is with the first of his carp. 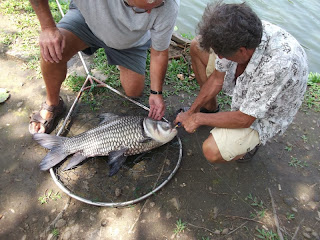 And here am I....in my usual position...on me knees looking after the angler who has just guided his second carp to the waiting net wielded by yours truly. And where, you ask, is our professional netsperson The Jai? Ha, she tells me there is no way she's going netting fish when we are in Phuket. She's much too important over here for all that nonsense. Nope, she's off attending the opening of a friend's clothes shop.....well, how interesting is that? 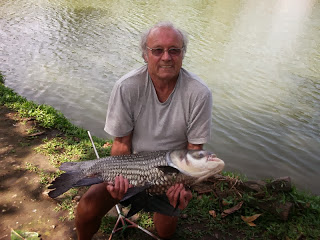 And here is Steve again....with his second carp of the day.... 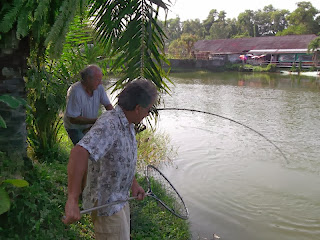 ...and now bending into his third carp. I was kept pretty busy as the lads were also catching catfish, pacu and giant somethings which looked like black bream. 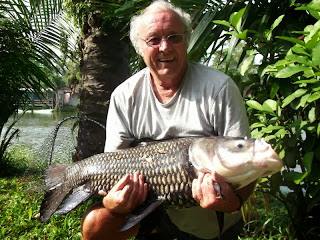 This was probably Steve's biggest carp of the day...a very solid fish weighing about 30lb. 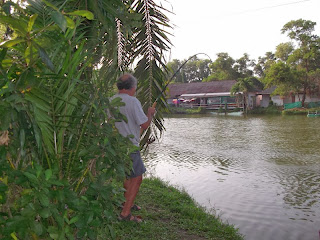 And now bent into a fourth carp later in the afternoon... 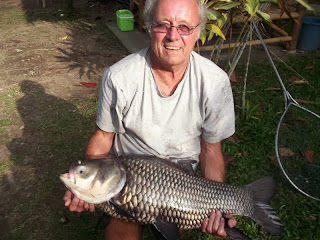 Another fabulous fish and a super day concentrating on the Siamese Carp. We used our new Shimano Cruzar 21002 rods courtesy of Mr Moo's Tackle Shop in Chalong paired with 6 x Grauvell fixed spool reels supplied by Grauvell as our main tackle sponsor. The reels were all loaded with 25lb Trilene which the lake owner preferes as a minimum breaking strain line for these very powerful fish. Each of the three lads fished two rods.

I've just returned from Phuket Airport having taken seen Mark off on his return to UK. Mark has been a real pleasure to have here. A dedicated angler and excellent company.

We are always saying what a small world it is now because of the air travel available. Steve Porter, skipper of Poole based True Blue, has started a project in Florida. Steve has rented a big house and has a purchased a boat. He aims to provide UK style 'hands on' fishing in USA waters and at half USA prices. This will be for February and March 2014. Mark Butland has already booked up 2 weeks to be with Steve Porter and as a co-incidence son Tom will be in Florida  at the end of Feb and first 2 weeks of Florida....so he has also contacted Steve. This means Mark and Tom will meet up and be fishing together....I mean...that is a hell of a co-incidence. Poor Mark; just got shot of old man Whittall in Thailand only to be confronted with Number One son Whittall in Florida.
Posted by OFFSHORE REBEL THAILAND at 9:57 PM