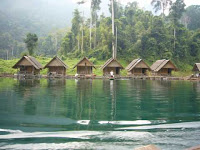 The Cheow Lan Lake was formed in the 1980's when the Khlong Saeng river was damned to power a new H.E.P. Now this enormous 28 km long lake is dotted by over 100 islands and its forested shore provides sanctuary to many species of birds and some primates, especially gibbons. 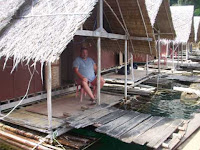 The lake also contains 8 floating villages with a range of accommodation within each. It was our intention to go right back to basics....and we did!! Here's our floating shack with the Grand Shack Master, Mr Gary Chard presiding over his new Kingdom. 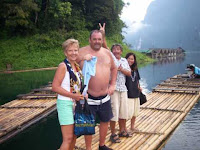 Our morning lake safari started at 0600. After a gentle hike through densely jungled mountaineous terrain, we ended up standing on a pile of bamboo poles lashed together and called a raft.
This was to be our craft to take us to the famous Cheow Lan Cave. 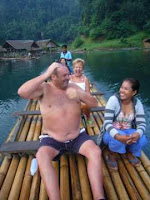 Our guide, Khun Lac, kept a wary eye on The Gary who threatened to knock her overboard everytime he stretched. 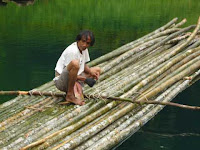 One of the rafts was in for repair. Here's a Lakeside Mechanic tying it back together. 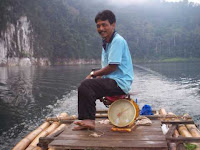 Our raft Captain had the latest in Hydraulic Seats....a set of scales. The scales indicated that he weighed 11Kg. When asked where he got this fine set of inaccurate Salter top price scales from, our Captain explained they came direct from Weyfish and had not been tampered with since leaving Weymouth. (??????) 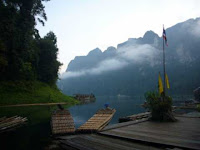 Early morning scenery at the lake is very impressive with low lying cloud shrouding the Karsts. 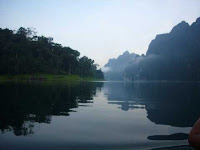 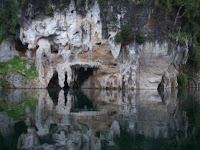 The Karsts have small cavelets along the current water line....but dramatic caves have been carved out by water action and have produced some pretty amazing natural sculptures inside.... 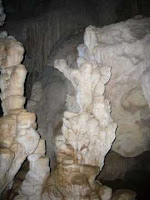 Every culture sees different things in Nature. In Thailand everything is either a monkey, an elephant, a naga (serpent), a garuda or some other strange creature from Thai mythology. Not too sure what this particular one is other than a spectacular bit of water carving on limestone deposits. 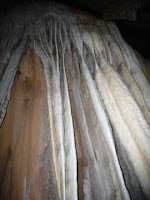 This sculpture was so thin that a light held behind it made the whole structure glow. This fragile waterfall like carving was over 50' high....an amazing sight. 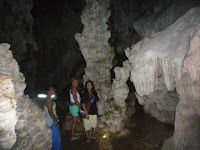 Here are two of the intrepid explorers with our cave guide. This gives an ideas of the scale of the formations. 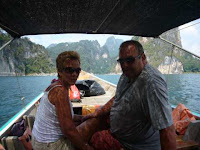 Our two Hollywood stars chill out on the way back across the lake to the dam. 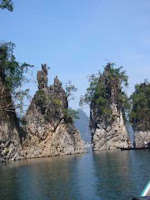 The whole area is very photogenic and, as is the case with digital photography, we have at least 11 million photographs by now....but these are just a few to give a general idea of this little adventure.
I can see this becoming a favourite place to take you all if you have time!!! Very nice!

Posted by OFFSHORE REBEL THAILAND at 1:05 AM